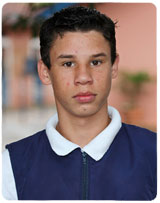 Alexandre started riding with his father Antônio Mariano de Souza when he was just 4 years old; his first horse was Morabito do Mirante.

At the age of 6, he rode Omisso Interagro at an Auction in São Paulo under his father’s supervision.

Alexandre used to have riding classes with Mauricio Delucchi at his school vacations for years.

In 2009 he started to work at Interagro Farms, always under the supervision of  Interagro´s head-trainer Martina Brandes.