Classic dressage is an Olympic sport.  Its origins date back to ancient war practices and through remakes of those tests put into practice in 19th century’s European armies. There is a certain number of movements that must be carried out in Dressage and they are called figures. The goal is to get the highest possible score.

To have a good performance at a figure, both horse and rider must be confident, must have a bond, since even the slightest error affects the entire quality of the movement and eventually, the score. For a horse to get to the Olympics, a lot of Training, Health and Luck are required.

Generally speaking, the Training of a dressage horse gets started at the age of 4 to be continued all the way until its best, what usually happens between 12 and 16 years of age.

That’s a gradual work that demands much patience, particularly at building a mutual trust relationship between horse and rider. After all, it’s no easy task commanding an animal weighing around 500kg with simple commands from a rider who’s on top but weighs only between 50 and 70 kg!

-The importance of Health is basically related to the capability of the horse to endure 6 days a week and 11 months a year of various kinds of exercises. By the age of 12 the horse will have turned into a true and heavily muscular athlete with a personality of his/her own!

As for Luck, that is a true need at many of the stages of work with the horse. No matter how hard a rider analyzes the conformation, gait, temperament and health when choosing a horse in the field, good luck definetely counts for the confirmation and combination of the factors.

The judgment in a dressage test is rather subjective. The judges analyze the reprise of each team giving scores from 1 to 10 for each of the figures performed. The judges get specific training and achieve higher levels in the judging scale depending on the number of hours they have worked in judging, and on how up-to-date they are, meaning how much training they have been taking part in lately.  There are several series, in accordance with the level of difficulty of the figures. The easiest one, for beginners, is the elementary. After that, it goes as follows: Preliminary, Intermediate I, Intermediate II, upper level and International GP. There are various figures divided in minor or greater levels of difficulty according to the level of the reprise. Some examples of figure are: extended canter, free walk, simple change in canter, tempi change in canter, pirouette, shoulder in, travers, renvers, passage, piaffe, etc.

Classic dressage is practiced at competition standards by approximately 200 riders in Brazil.

The national competitions are concentrated mainly in São Paulo but also in the states of Rio de Janeiro, Paraná and Rio Grande do Sul.

Some isolated initiatives of private companies or groups of people who admire the sport have sponsored championships of good quality, clinics with trainers from abroad and the presence of judges of international reputation.

In average, between 8 and 10 nation-wide events take place throughout the year.

Other facts that have contributed to the development of dressage riding is its increasing media coverage, putting the spotlight on the sport and its practitioners, not to mention the usual interest of FEI – International Equestrian Federation in spreading out the modality.

Like other international federations of its sort, the FEI aims at increasing the popularity of the sport, and Brazil, the biggest country in South-America, has benefited of some of its actions. The majority of teams that brought the tradition of this sport into Brazil is of European origin and have come from countries where it is very popular, like Germany, Holland, Sweden, Switzerland, Denmark, France, among others. Three-day Event riders have been paying more and more attention to dressage, as it is an important part of the competition that also features classic equestrian cross country.  The last time Brazil took a team to the Olympics was in 2000, when rider and entrepreneur Jorge Rocha represented the country in the Individual Test at the Sydney Olympic Games. 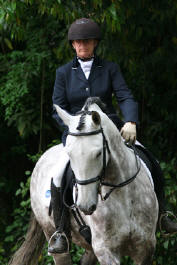