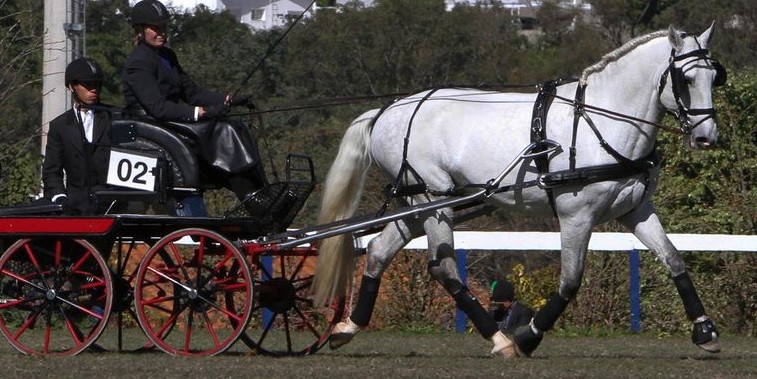 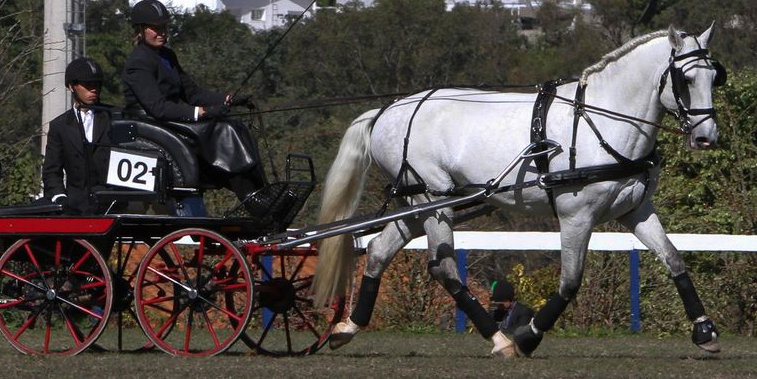 Versatility and Trainability: Hallmarks of an Interagro Lusitano

Wellington, FL (August 15, 2013) – Martina Brandes’ Lusitano stallion, Bomilcar Interagro, is a perfect example of the breed’s versatility, trainability, and wonderful temperament. The eight year-old stallion is by Quixote Interagro and out of the mare Kipper SA. Known simply as “Bo” around the barn, Bomilcar’s gentle personality and athletic versatility have made him a successful competitor both under saddle in dressage or put to harness as a driving horse.

“He is my prince,” says Brandes, who currently resides in Holambra, Brazil. “As you know, sometimes we fall in love with a certain horse, and Bomilcar has proven to amazingly talented. He was started under saddle, with a focus in dressage. At the moment, he is going at Fourth Level and I am very hopeful to begin campaigning him on a Small Tour.”As head trainer at Interagro Lusitanos in Itapira, Brazil, Brandes has ridden and trained her fair share of horses, both Lusitanos and other breeds. But something about Bomilcar caught her eye from the beginning, and her intuition proved to be spot on. Bomilcar, who was trained by Brandes, is now competing successfully in both dressage and driving.

In late 2012, when his owner decided to branch out in her horsemanship, Bomilcar was with her at every stride. “I had always liked driving and had wanted a chance to learn, so I asked Antônio if we could try to teach Bo to drive. We took a chance and started in January,” she says, smiling broadly, “By June, we were heading to our first driving event.” Antonio Mariano de Souza is the Interagro’s resident driving expert, and schools four-, six-, eight- and 10-horse teams at the farm.

Brandes and Bo made their driving debut competing in the Singles division at Morungaba. In his first driving event ever, Bomilcar Interagro’s fine scores took his owner to the reserve title in the beginners division, and his trainer to third place in manageability and marathon in the professionals division.

Little more than a month later, at only their second combined driving competition in Campinas, Bo and Brandes won their beginner Singles dressage and manageability phases.

“That really shows how the Lusitano is so versatile. Bo is such an easy learner! He seems to be having as much fun as I am,” says Brandes. “You can practically see a smile on his face when he is working. Of course, he has a super sweet temperament and does love to show himself off!”

That natural self poise and personality is part of what initially inspired Brandes to choose the horse as her own training prospect. “Why did I buy him? From the moment he came in to be started, he caught my eye. As I watched his training progress, I still loved him. The Lusitano has such a special ‘look’ and indescribable sweetness. It’s just the way the breed has been developed and it shows in everything that Bo does,” said Brandes.

Founded in 1975 by Dr. Paulo Gavião Gonzaga to preserve the Lusitano breed, Interagro Lusitanos is now recognized as the world’s largest breeder and exporter of Lusitano horses. Dr. Gonzaga started with a small band of four mares and one stallion imported to Brazil from the breed’s native Portugal; to date over 600 horses populate the 1200-acre ranch outside São Paulo. Today, Cecilia Gonzaga manages the farm and operations. Interagro Lusitanos are handled, prepared, and evaluated from birth, with a handful of the best stock presented at auction each year. Learn more at www.interagrolusitanos.com.