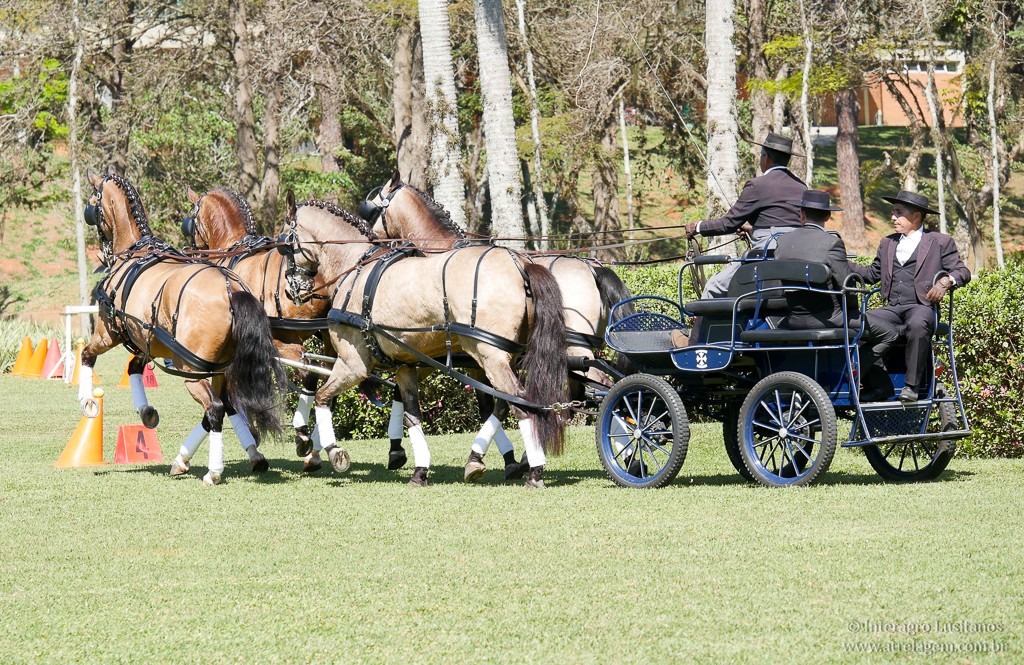 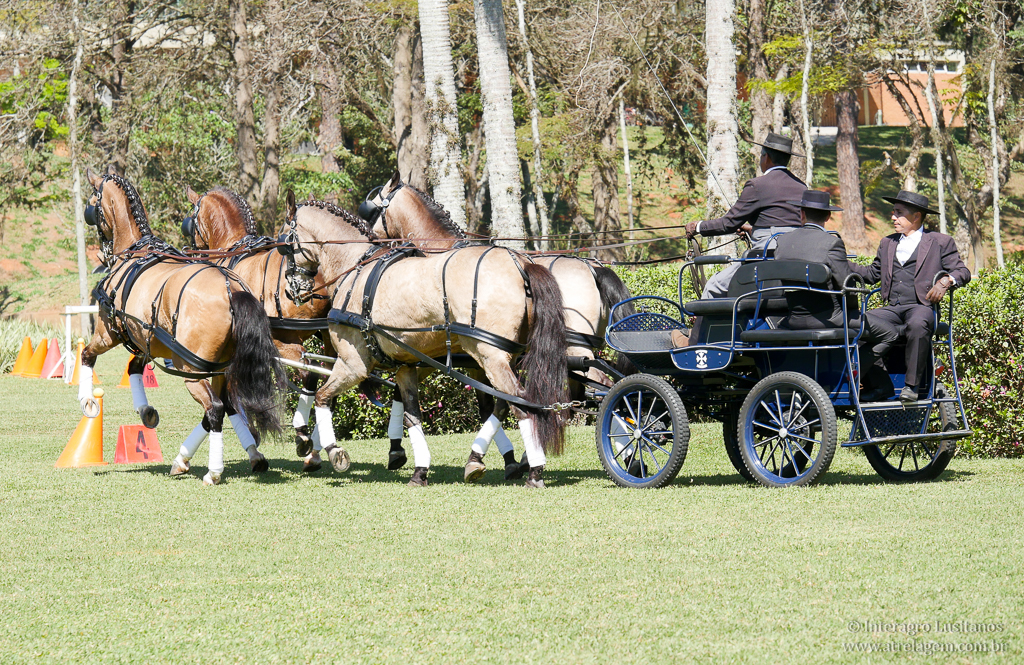 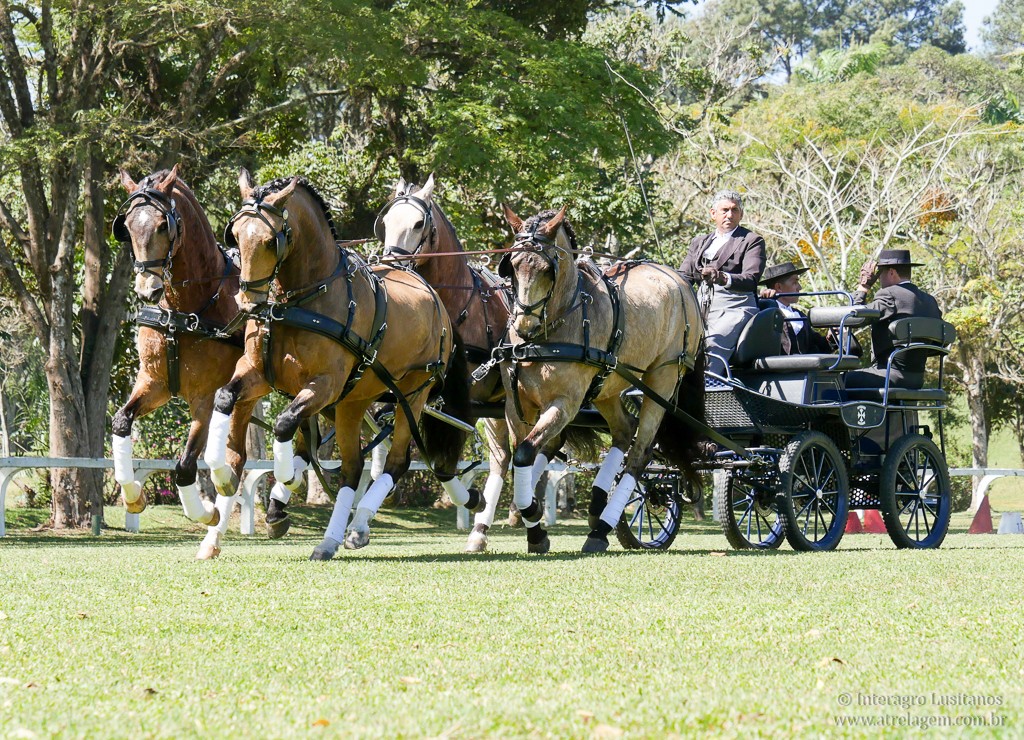 São Paulo, Brazil (August 19, 2019) – Hoof and carriage wheel met Brazilian turf this August as the baroque beauties of Interagro Lusitanos strutted their stuff in harness. At the 1st Phase of the 2019 CBH Brazilian Driving Ranking, held at the São Paulo Country Club, two debutante mares and a quartet of buckskins drove to excellence in the Singles, Pairs, and Four-in-Hand divisions. These driving accolades are the most recent in a long line of competitive success for Interagro, the result of over 4 decades of breeding prowess with the goal of developing a modern Lusitano for the FEI disciplines.

Two of Interagro’s leading ladies, Carmelita Interagro and Ilíria Interagro made their debut show performance at the 1st Phase of the 2019 CBH Brazilian Driving Ranking. With both mares hailing from exceptional dressage bloodlines, each danced their way through the cones obstacles to secure a one-two placing. Ilíria, the only bay among her buckskin driving counterparts, won the Single Professional division with Antonio Souza at the reins. Elegant Carmelita was not to be outshone, and she finished second just behind Ilíria. A daughter of the spectacular Grand Prix dressage stallion Nirvana Interagro, Ilíria’s conformation and naturally uphill movements reflect her sire’s talent. Carmelita’s talent as a competitor is dovetailed with her value as a broodmare; her filly, Oblata Interagro, will be offered for sale at the 18th Interagro Yearlings Auction on August 31st. 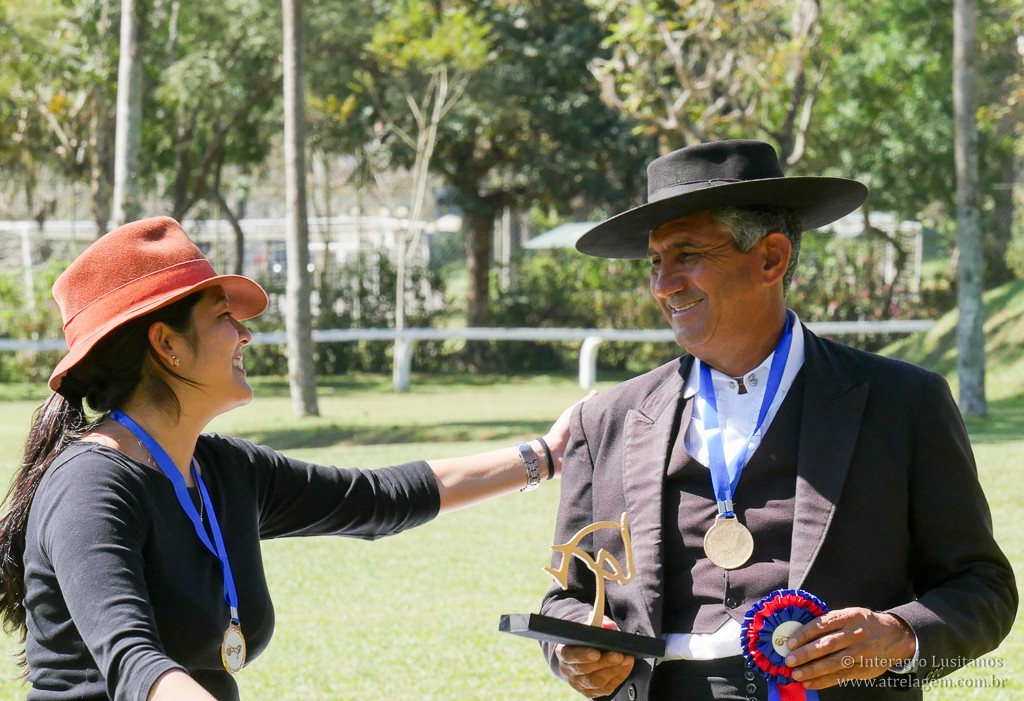 Interagro’s mares have long been a source of pride for the 1,300 stud farm and training facility. Perfectly pairing mares and stallions has been the goal of their meticulous breeding program since 1975. In their quest to develop the modern Lusitano from traditional bloodlines, Interagro’s portfolio of mares includes some of the most sought after lineages and award winning dams in the Portuguese breed. Carmelita and Ilíria, through their competitive success, encapsulate the elegance, athleticism, temperament, and beauty of the modern Interagro Lusitano.

All above photos courtesy of Interagro Lusitanos unless otherwise noted