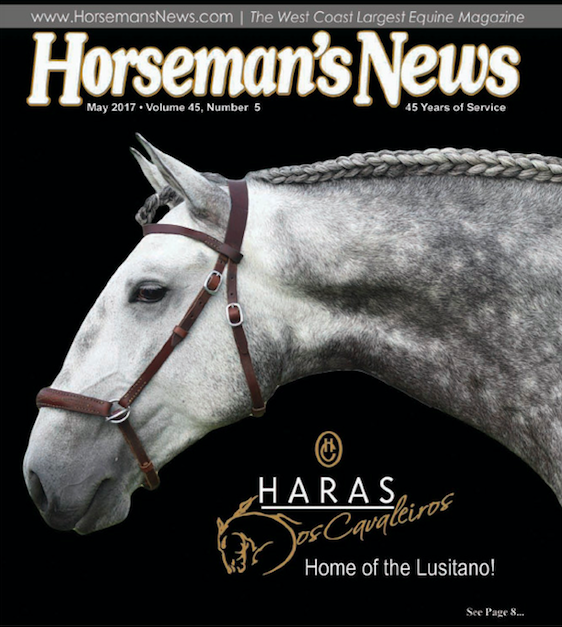 Itapira, SP, Brazil (June 23, 2017) – The beauty and presence of the Interagro Lusitano have caught the eye of international publications around the world, from Dressage Today and Horseman’s Yankee Pedlar to Zulu Interagro posing with supermodel Gigi Hadid in the December 2016 article of Allure. In May 2017, an Interagro stallion once again was featured as the cover image for one of the US’s top equestrian magazines, Horseman’s News, boosting Interagro’s number of magazine covers from 22 to 23.
The regal profile of Hobbit Interagro (Bungo Interagro x Radiosa (MAC)), who was purchased and exported from Brazil to Texas by Haras dos Cavaleiros, graces the May cover against a black backdrop. Highlighting the horse’s excellent conformation, the cover features Hobbit clad only in the traditional halter and braids which sets off the dapple grey stallion’s elegant topline. The cover image was taken by Patricia Ernesto, wife of the head rider of Haras dos Cavaleiros, which acts as ambassador for the Lusitano breed in the United States.
Hobbit Interagro is no stranger to the spotlight; at the 2016 North American Lusitano Show, his historic stallion revision score of 76.5 points is the highest ever awarded to a Lusitano in the United States, following nearly 200 horse revisions. The coming six-year-old stallion is described by Haras dos Cavaleiros as “stunning.” They also note that his temperament and willingness, paired with exceptional “suspension, suppleness, and lightness in his steps,” naturally inclines him for the upper level and FEI disciplines. 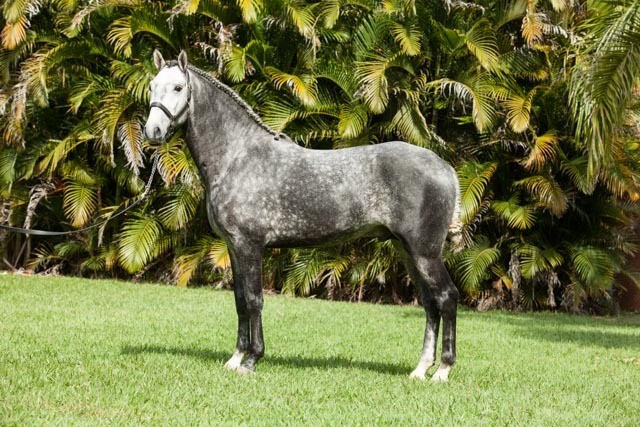 With over 40 years of experience breeding, training, and exporting Lusitanos, Interagro’s mission is to preserve the exceptional bloodlines and qualities of the breed while showcasing their talent, beauty, and intelligence, especially in the FEI and sport horse disciplines. Established in 1975 by Dr. Paulo Gavião Gonzaga, Interagro’s initial vision was to preserve and restore the original foundational Lusitano bloodlines and lineages, many of which were in danger of extinction following the Portuguese Revolution of 1974. Through meticulous breeding, exceptional care, and world-class training, the modern Interagro Lusitano sporthorse currently shows and competes in a variety of disciplines—including Grand Prix dressage, Paralympic dressage, World Cup working equitation, driving, and jumping—continuing that legacy as they compete across four continents.

For more information on Interagro Lusitanos, Interagro’s horses for sale, or the Lusitano bloodlines, visit Interagro’s website at www.lusitano-interagro.com or follow them on Facebook. To organize a trip to Brazil or for any questions regarding sales or the logistics of importing horses to the US, contact Interagro at this link.
Media contact:
Equinium Sports Marketing, LLC | Holly Johnson  | holly@equinium.com | +1 954 205 7992