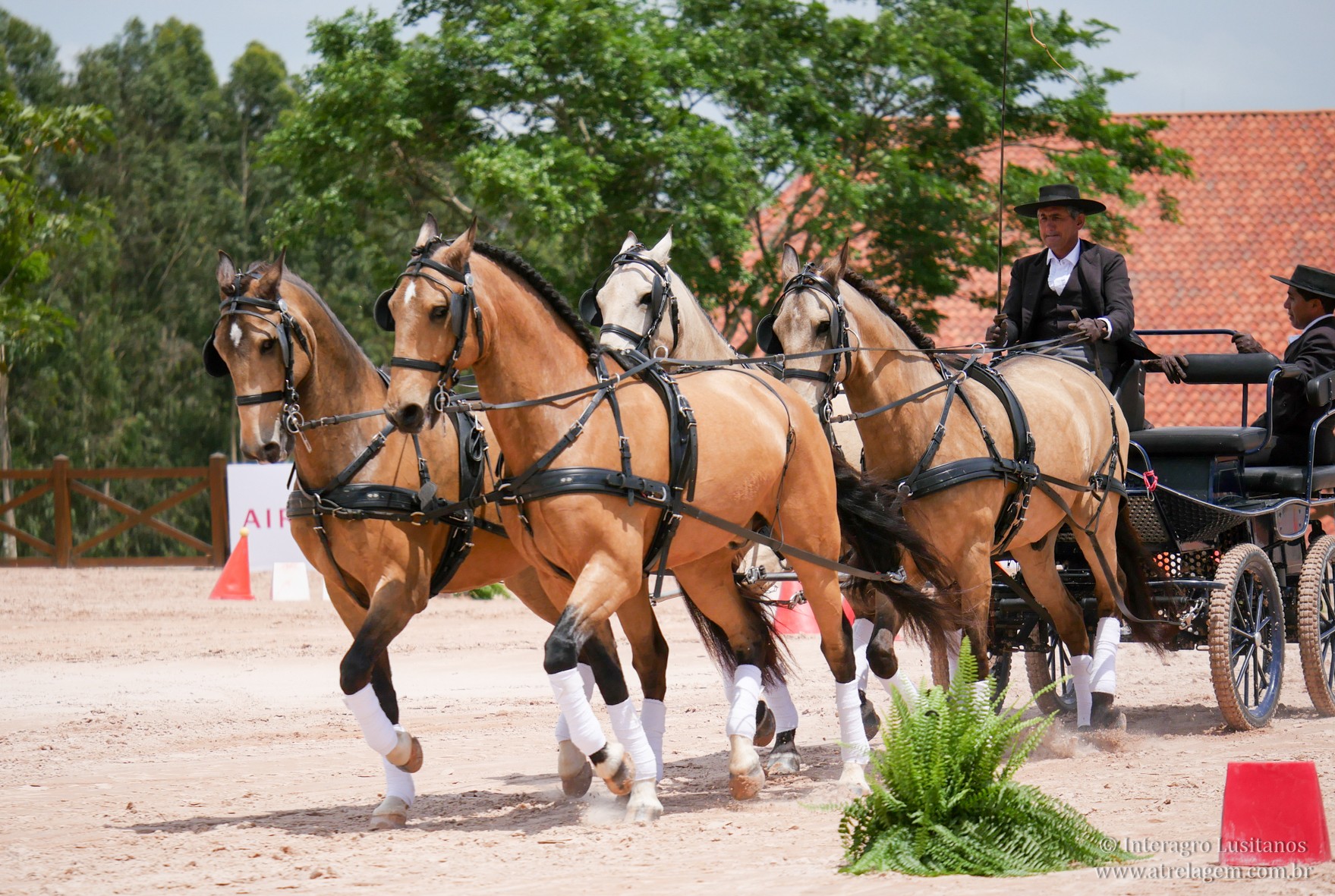 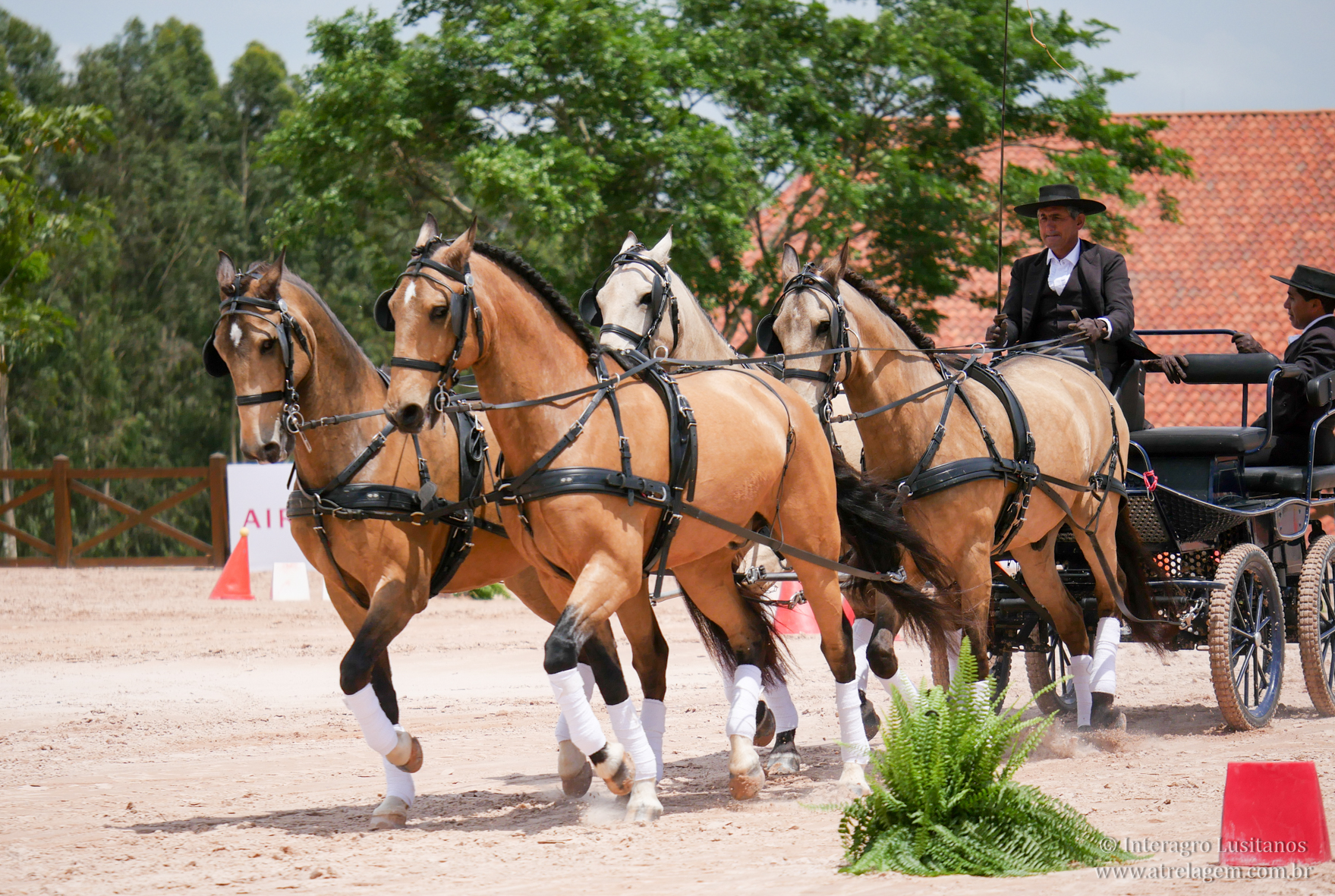 Itapira, Sao Paulo, Brazil (January 19, 2017) – 2016 was a spectacular year for the Lusitano sport horse, as the versatile breed continues to curry favor among riders, trainers, and owners across a variety of disciplines. Through over 40 years of exceptional breeding and a dedication to evolving the modern Lusitano from the purest Portuguese bloodlines, Interagro Lusitanos has been a major catalyst for the breed’s growth and success over the past few decades. With successful Interagro progeny winning in working equitation, driving, dressage, and paradressage, the Brazilian stud and training facility continues to raise the bar as their horses compete internationally across 4 continents.

In addition to the driving phases, working equitation proved to be a major forte for Interagro and its riders in 2016. The 2016 Brazilian Working Equitation Championship/Cia de ET saw Gotico Interagro (Profano Interagro x Zibelina Interagro) and Divisadero Interagro (Tufao Interagro x Saranga (VAN)) top the national rankings in their divisions. Gotico was awarded 2016 Championship Brazilian Ranking in the Novice A Division, while Divisadero also topped the 2016 Brazilian Ranking in the Intermediate division. Escudeiro Interagro (Perdigueiro (MAC) x Athena Interagro), who was purchased at the 2013 Interagro National Auction by Mrs. Claudia Uenishi, rounded out the Interagro string of successes with Jose Faria in the saddle. In the beginning of 2016 and on a different continent, Working Equitation World Cup Champion Xaveco Interagro (Profano Interagro x Dona RC) repeated his World Cup success at the 2016 Haras Cup, the premier Working Equitation Championships in the United States. Hosted by Haras dos Cavaleiros of Magnolia, Texas, Xaveco was piloted by France’s Claire Moucadel and dominated in all three phases of the event. 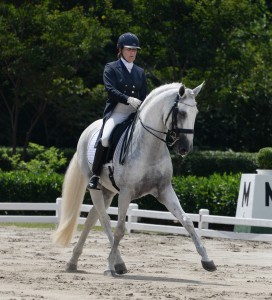 Interagro’s long list of Brazilian rankings extend into the dressage arena, where Baldor Interagro (Ofensor (MV) x Quinata Interagro) and Fellini Interagro (Nirvana Interagro x Batina Interagro) dominated their FEI divisions. Baldor and Pia Aragao swept the Small Tour at the Sao Paulo CDI-3/Brazilian Dressage Championships with a personal best score of 72.350 in their Freestyle. Fellini, also ridden and trained by Aragao, took top honors in the CAN National Dressage in Sao Paulo in May with scores of 8.20 and 7.18 in the FEI 6-Year-Old division, and won the Brazilian 6-Year-Old Championship at the Sao Paulo CDI-3 with final scores of 7.14 and 7.50.

Perhaps the highlight of Interagro’s slew of wins in 2016 was the achievement of Zizifo Interagro, who along with rider Patricio Guglialmelli of Argentina and owner Gea Einaudi of Italy qualified for and competed in the 2016 Rio Games. Competing for Argentina in the Paradressage, Zizifo’s accomplishment in the Paralympics marks a major milestone for Interagro, who through their breeding program has actively sought to develop a horse with the athleticism and temperament to compete in the upper echelons of horse sport.

In the spring of 2016, 5 of Interagro’s stallions were approved by the ABPSL Stud Book. Caudilho Interagro and Gladiador Interagro, who were presented for revision by internationally renowned Portuguese trainer and competitor Jorge Sousa, topped the field with scores of 75 and 74.5. Fellini Interagro finished with a score of 74, while Ditador Interagro and Empreiteiro Interagro earned 72 and 68.5.

In the United States, two of Interagro’s exported stallions also were successful in their revisions, with one making history as the highest score ever received in the US. Hobbit Interagro (Bungo Interagro x Radiosa (MAC)) and Governador Interagro (Ofensor (MV) x Quantia Interagro), both owned by Haras do Cavaleiros, were evaluated at the North American Lusitano Show by three judges: one from Brazil, one from France, and one from the ABPSL. Hobbit’s score of 76.5 is the highest score ever awarded to a Lusitano in the United States, following more than 200 horse revisions. Governador’s impressive score of 71 brought more acclaim for Interagro horses in North America.

Despite a lackluster Brazilian economy, the resounding success of Interagro’s 2016 Yearling Auction proved that the demand for exceptional Lusitano horses has not waned. With all but 2 fillies sold and an average price higher than 2015, the Yearling Auction also boasted a high turnout of Lusitano enthusiasts. With a number of unique and rare lineages represented in the auction barn, the average selling price of this year’s auction finished at 16,933 Brazilian reals, or approximately 5,187 US dollars. The elegant Ministro Interagro brought in 2016’s price highlight, selling for 42,000 Brazilian reals (USD 12,865).

With over 40 years of experience breeding, training, and exporting Lusitanos, Interagro’s mission is to preserve the exceptional bloodlines and qualities of the breed while showcasing their talent, beauty, and intelligence, especially in the FEI and sport horse disciplines. Established in 1975 by Dr. Paulo Gavião Gonzaga, Interagro’s initial vision was to preserve and restore the original foundational Lusitano bloodlines and lineages, many of which were in danger of extinction following the Portuguese Revolution of 1974. Through meticulous breeding, exceptional care, and world-class training, the Interagro Lusitanos of today continue that legacy as versatile, athletic, and intelligent partners for their riders and successful competitors on the international stage.