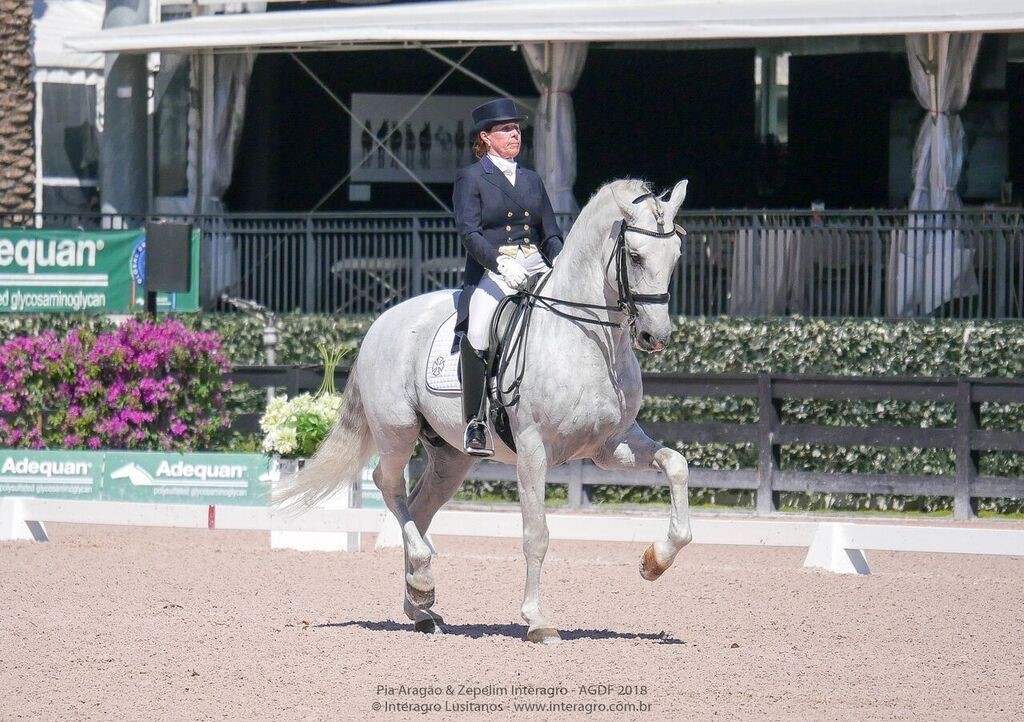 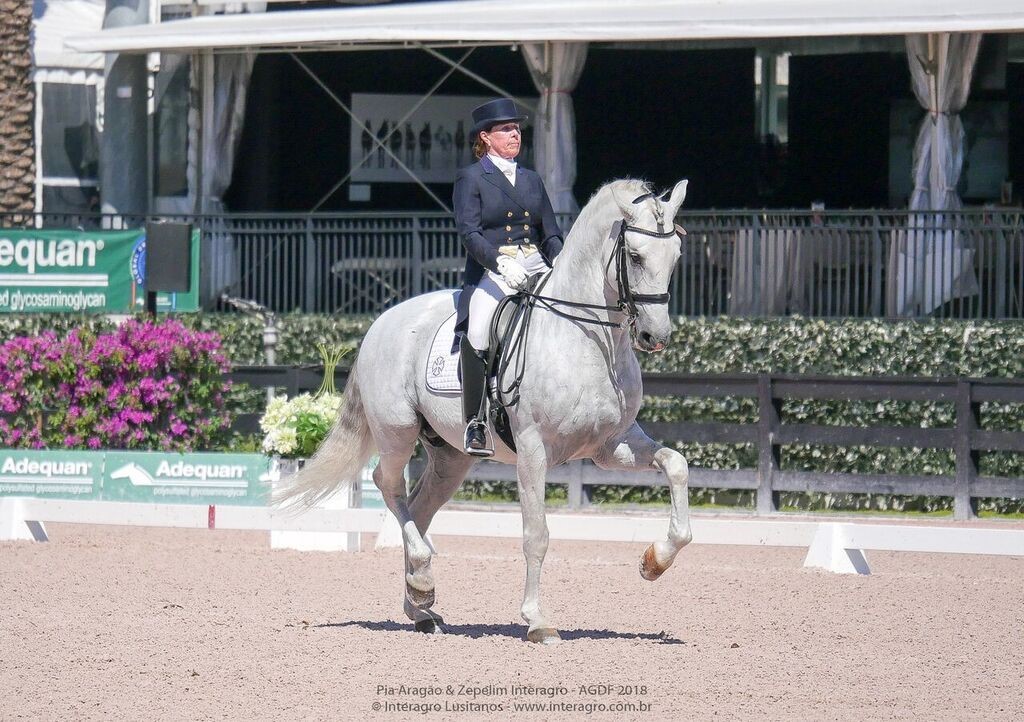 Wellington, FL (May 19, 2018) – Dressage and the Interagro Lusitano sporthorse are naturally synergistic; the intelligent, elegant, and athletic equines pair seamlessly with this sport of power and precision. For over four decades, Interagro has been breeding exceptional dressage horses and in the first few months of 2018, their most recent group of competitive Lusitanos stepped into the dressage arenas of the Adequan Global Dressage Festival to continue that legacy.
Journeying to Wellington, Florida from Interagro’s stud and training center in Itapira, Sao Paulo, Brazil, two stallions owned and currently standing at Interagro blazed a trail of dressage excellence. Zepelim Interagro (Quinarius Interagro x Ordenada Interagro) kicked off his 2018 show season with a 68.315% and a win in the AGDF 7 FEI Grand Prix. Ridden and trained by Pia Aragao, this impressive 16.3h gray stallion exuded a presence of power and poise in his exceptional collected work and elastic extensions. Winning his first US Grand Prix was a fantastic start, and Zepelim kept up the momentum through March in the Grand Prix and made his debut CDI performances in the Grand Prix and Grand Prix Freestyle during week 10.

As the yin to Zepelim’s yang, the 8-year-old Fellini Interagro (Nirvana Interagro x Batina Interagro) stepped out in his first US competition with increasingly spectacular efforts in the Prix St. Georges and Intermediare I. Capped by a high score of 69.559% in the FEI Prix St. Georges during week 10, the impressive black stallion’s successful US show debut builds upon a decorated Brazilian career in the Young Horse divisions. Also ridden and trained by Pia Aragao, Fellini epitomizes the athleticism, beauty, and movement that have become the hallmarks of the Interagro sporthorse.
“Both Fellini and Zepelim went above and beyond during our Florida winter show season,” said Aragao. “Zepelim made amazing strides in the Grand Prix and continues to improve, while Fellini proved himself to be a consummate competitor and to possess all of the ability and presence of his sire, Nirvana.” Both horses returned to Brazil in early April.

Another Interagro stallion, Belisario Interagro, was also taking home two blue ribbons and other top finishes in the Grand Prix at the 2018 Global Dressage Festival. Owned, trained, and ridden by Kate Poulin of Fair Weather Farm in Chagrin Falls, Ohio, Belisario made his Grand Prix debut in the fall of 2017. Belisario (Quixote Interagro x Urzelina Interagro) was sold to Poulin as a 5-year-old during the 2010 Lusitano Collection International Horse Auction, hosted by Interagro in the US. Under the tutelage of her mother, USEF “S” Judge Sharon Poulin, and US Olympian Debbie MacDonald, Kate Poulin and Belisario posted personal best scores in the national Grand Prix during the 2018 Florida dressage season. “Belisario loves his work and is always so focused,” said Poulin. “This combined with his intelligence and natural talent for piaffe and passage has made him a fantastic Grand Prix horse. He is a true partner, and riding him as given me deeper insight into what dressage is really all about.”

While Interagro’s upper level stallions were taking center stage at the Global Dressage Festival, a number of geldings from the farm’s H Generation were also having success in the dressage arenas of North America. Tyra Vernon of BREC Dressage in Ocala, Florida rode Hadrian Interagro, Hawk Interagro, and Horacio Interagro to many blue ribbons and high point awards. Hawk’s first time out at 3rd Level he was High Point Champion at the Sweetheart Cup in Orlando; Hadrian competed at 3rd and 4th Level scoring 68.3% in his first show at 4th Level. This athletic grey gelding also won a 3rd Level class at the Global Dressage Festival in March. Hawk and Hadrian are now qualified for Regional Championships this fall in Atlanta, and their third Interagro brother, Horacio, recently made his First Level debut with BREC trainer Kerryann Schade, winning the class with 70.8% and putting in one score towards qualifying for Championships. Vernon purchased all three Interagro horses from Brazil with the guidance of US Sales Representative Peter van Borst, and has utilized the Interagro support system not only for pre-purchase exams, shipping, and logistics, but also for training advice and information once the horses arrive in the US. Vernon and her three 7-year-old geldings also attend numerous clinics with world class judges and 5* international judges like Janet Foy, Gary Rockwell, and Henk van Bergen on a regular basis: “All of our clinicians have had so many positive things to say about our Lusitanos and feel they all show great talent and promise as FEI competitors,” said Vernon. “We have started playing with piaffe and passage with Hadrian and Hawk and we are so excited with the quality they show for the Grand Prix. Henk said the only problem with Hadrian is that he wasn’t his! I’m very thankful to Peter and all of Interagro’s team for the opportunity to have such amazing horses. I continue to look forward to working closely with Interagro to supply myself, my trainers at BREC Dressage, and our clients with these top quality Lusitanos!”

Hobbit Interagro (Bungo Interagro x Radiosa MAC), a 7-year-old gray stallion owned by Haras dos Cavaleiros, competed at AGDF with rider and trainer Tiago Ernesto. This athletic stallion was noted for a spectacular canter, as well as his overall beauty and character, and has begun his career as a breeding stallion with Haras dos Cavaleiros. With every score over 70% and a high score of 73% in all of the Second Level Tests at Global, Ernesto stated that he was very happy with the horse’s performance overall and is looking forward to both Hobbit’s future and the future of the stallion’s offspring: “With Hobbit, his character is the most exceptional thing,” said Tiago. “But in addition he has fantastic gaits, movement, and athletic ability, which makes him a superb competitor as well as sire. We take it day by day with him, but his desire to learn and please the rider combined with his elasticity and talent for collection make him a great Grand Prix prospect.”

For more information on Interagro Lusitanos, Interagro’s horses for sale, or the Lusitano bloodlines, visit Interagro’s website at www.lusitano-interagro.com or follow them on Facebook and Instagram (@interagrolusitanos).
To organize a trip to Brazil or for any questions regarding sales or the logistics of importing horses to the US, contact the farm at this link.