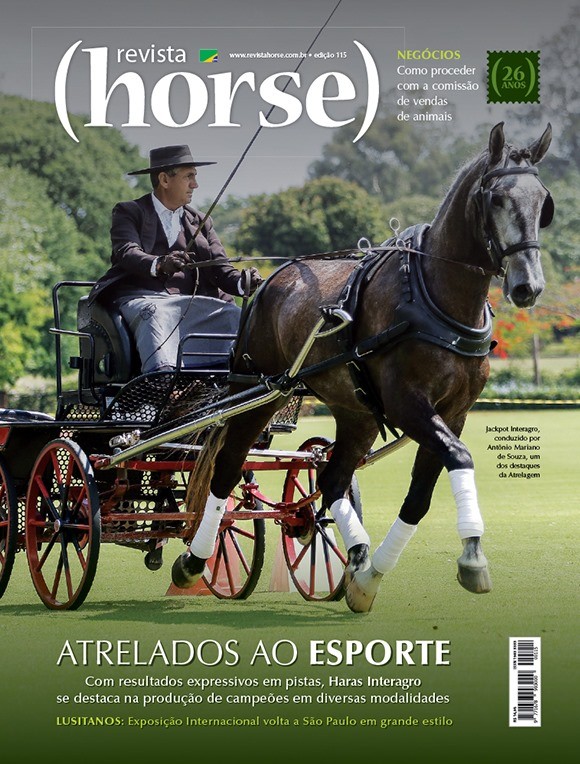 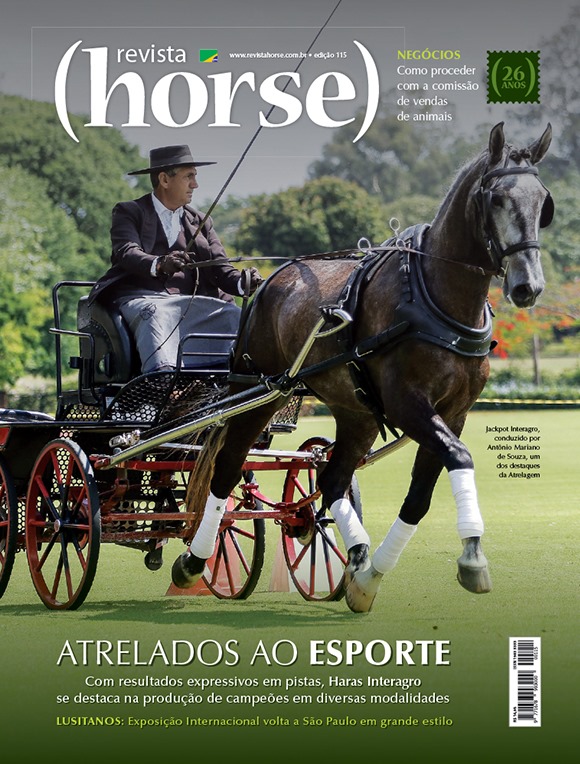 São Paulo, SP, Brazil (June 28, 2019) – Two disciplines, two events, one national magazine cover: Interagro Lusitanos hit the jackpot this past month, and not only because Jackpot Interagro made the cover of Revista Horse. During the Premio Hipismo Brazil and the ABPSL’s Dressage Cup and 38th International Lusitano Show, horses both owned by Interagro and bred by Interagro and sold to clients earned top scores and finishes in dressage and driving at both the national and international level.

In recognition of such accolades, Revista Horse, one of Brazil’s most prestigious equestrian magazines, featured Professional Singles competitor Jackpot Interagro and Antonio Mariano de Souza on the cover of their June issue. As the first time the magazine has featured a driving horse on the cover, Jackpot’s cover boy status highlights his award as the best Professional Singles Driving Horse of 2018. Jackpot is the last son of the highly decorated dressage stallion Nirvana Interagro and the black mare Naranja do Mirante, who scored 80 points at her revision and is the mother of Varanja Interagro and Zampano Interagro, who were sold to the US, as well as Apache Interagro who was sold to Canada, and Black Widow Interagro and Curupira Interagro, who are part of Interagro’s breeding program.

Alexandre Souza & Hectar Interagro won the FEI 7-Year-Old class with a 64.643%, showing off Hectar’s improvement over the course of the last few Interagro Dressage Rankings. Lavagante Interagro, with Edmar Brito in the saddle, finished 2nd in the First Level Professional division with a 68.88%. Brito also finished 3rd in the Fourth Level Professional class with Empreiteiro Interagro, scoring a 66.757%. All three horses posted scores even higher than their previous Interagro Ranking scores, a point of pride for the Interagro Team.Changing gears from driving to dressage, the ABPSL’s Dressage Cup and 38th International Lusitano Show featured national and CDI dressage competition as well as breed classes and highlights. Competing in divisions from the FEI 7-Year-Olds to the CDI Grand Prix, Team Interagro and a number of Interagro-bred Lusitanos halted at X during the prestigious show.

As Interagro has sold and exported more Lusitanos than any breeder in the world, the show also featured a number of Interagro-bred Lusitanos that have gone on to success with their current owners. Dorus Interagro, with 2016 Brazilian Olympian and 2018 World Equestrian Games competitor Giovana Prado Pass in the saddle, finished 3rd in the CDI Grand Prix. At the national level, Gabriela Ribeiro and Zeca Interagro won the Training Level class for 7-11-year old riders while José Manuel da Silva Faria and Badalo Interagro finished second in the FEI Prix St. Georges.

For more information on Interagro Lusitanos, Interagro’s horses for sale, or the Lusitano bloodlines, visit Interagro’s website at www.lusitano-interagro.com or follow them on Facebook and Instagram (@interagrolusitanos). To organize a trip to Brazil or for any questions regarding sales or the logistics of importing horses to the US, please contact the farm.With over 40 years of experience breeding, training, and exporting Lusitanos, Interagro’s mission is to preserve the exceptional bloodlines and qualities of the breed while showcasing their talent, beauty, and intelligence, especially in the FEI and sport horse disciplines. Established in 1975 by Dr. Paulo Gavião Gonzaga, Interagro’s initial vision was to preserve and restore the original foundational Lusitano bloodlines and lineages, many of which were in danger of extinction following the Portuguese Revolution of 1974. Through meticulous breeding, exceptional care, and world-class training, the Interagro Lusitanos of today continue that legacy as they compete across four continents.