Son of Coimbra stallion Perdigueiro (MAC) who proudly sired an offpring prized at Conformation Classes, Dressage, Working Equitation and now Jumping. His dam – Vilna Interagro – is a daughter of Quínio Interagro and Mucuna Interagro – half sister to Dressage Champion Nirvana Interagro – is the mother of Zamorim Interagro, prized at Dressage in Brazil and nowadays in training for Driving in Uruguay to compete at International Shows. Also dam of Sargon Interagro, deeply missed, who had a brilliant Dressage career in USA. The stallion Cezanne Interagro is also out of Mucuna and is in training and competing at Dressage with Pia Aragão.

Mariana Falcão Arantes has a long list of championships from jumping competitions in Brazil – in fact too long to categorize here. Suffice to mention that last year she had considerable success with her jumping horse, a Lusitano named Monetario Interagro. Together they were Vice Champions in Class One of the CCSP in March and went on two months later to become Champions of the CCSP Derby, Class One.

“I had no previous experience with Lusitano Horses until 1998, when I began my work with Interagro. I am very impressed by their intelligence and dedication to work.

“These qualities, plus their disposition for working hard, have been responsible for the good results I have been obtaining with them.

“The Lusitano horse has exceeded all my expectations and I was really surprised by their docility and by the excellent results I got riding Interagro horses in 1999, in as much as this was a new experience in the very traditional field of jumping.”

Mariana Falcão Arantes and Monetario Interagro are in the early stages of competition but are already champions in São Paulo, Brazil. 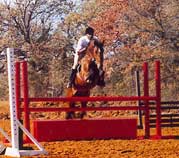 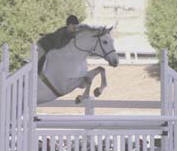