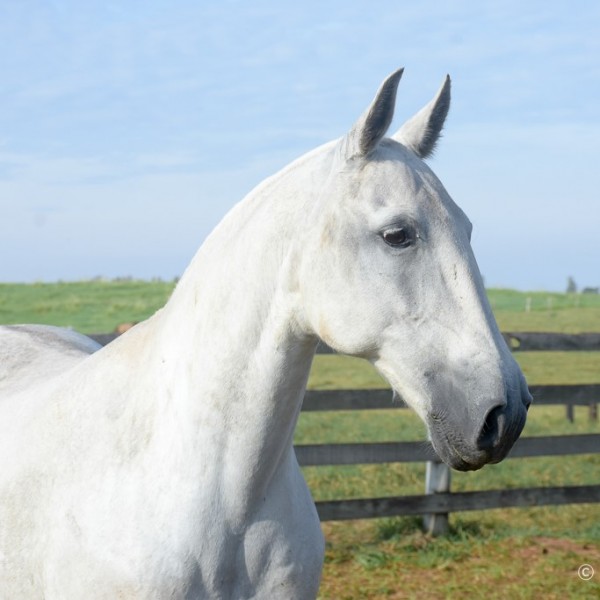 Capitu is a broodmare of exceptional build and excellent temperament. Before joining Interagro’s select group of broodmares, Capitu served as a quality riding horse because of her trainability and willing attitude. Capitu is also the full sister to Virgínia Interagro, the dam of Gladiador Interagro, one of Interagro’s newest stallions who was revised with a score of 74.5 in 2016.

Virgínia is also a daughter of Quixote Interagro, a paternal brother of Ofensor (MV), both by the fabulous Danúbio (MV), a stallion used by Interagro to promulgate the exceptional characteristics of this lineage. On his dam’s side, Quixote is a son of Dançarina (RC), daughter of Venturoso III (MV) by Xinesa (RC) who is a daughter of Pandeireta (MP), one of the greatest brood mares in the Lusitano breed. Both Danúbio (MV) and Venturoso III (MV) have Oferta (MV) as their dam, thus introducing an important consaguinity and a fantastic pedigree. Quixote was revised with the high mark of 79 points, including receiving a 9 for his terrific gaits. He displays extraordinary conformational qualities, a striking beauty, charisma, and magnificence combined with excellent gaits, temperament. He typically produces extremely elegant and athletic horses, many of which have been very successful in dressage, paradressage, and working equitation.  Quixote’s superior qualities have earned him a reputation as one of Interagro’s most important stallions. The proven combination of the Quina blood into the offspring of Danúbio (MV) has created a diverse and exceptional opportunity to breed extraordinary horses for the dressage arena. These individuals have consistently outperformed the other bloodlines in all the essential points demanded in the stringent selection process carried on by Interagro, and therefore continue to grow in the select group of Interagro broodmares.

Her dam is Quintilha Interagro, one of the most important brood mares at Interagro who has 4 daughters in our breeding program: Virgínia, Capitu, Dulcineia and Erigone. She is a daughter of the late Xique-Xique (CI) with the Palha Blanco Consoada (QF), approved with 79.50 points, three times awarded in Portugal in 1985, 1987 and 1989 and Gold Medal in Brazil. Quintilha was one of the most important mares in the Interagro breeding herd, leaving an important offspring with a preponderance of females such as Dulcineia, Erígone, Capitu Interagro (mare that was ridden and worked in the field until 2013 and was recently incorporated into the breeding program), Zidanta and Virgínia Interagro, dam of the grey stallion Gladiador Interagro approved in 2016 with 74.50 points. Among the few males born stands out the talented Hamurabi Interagro exported to the US in March 2017 and a full brother to Lavínia Interagro.