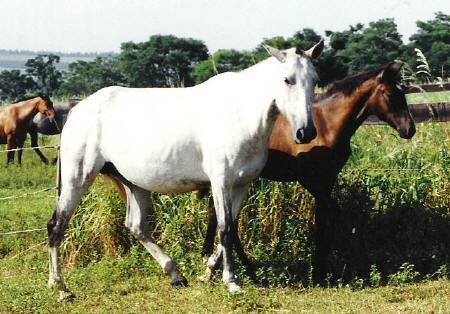 Cyclope (SA) is a daughter of Vidago (SA), a very famous stallion grandson of Martini (SA) the son of Príncipe VIII (FCN) that formed the Andrade lineage. Cyclope (SA) is one of the most important mares at Interagro. It is widely believed that mares may have a stronger influence in any breeding program than the stallions themselves. Consequently, through their outstanding sons, they have perpetuated themselves in the pedigrees of the fortunate breeders who own them. This breed­ing axiom – entirely accepted by the Arabian horse breeders – seems to be working well at many Lusitano breeding farms. Interagro is not an exception; here a few mares, like Cigana III (MLC), Haste (SA), Biluca do Mirante and Jutlândia (SA), just to mention a few of them, are respon­sible for the birth of some of the most important stallions extensively used in our breeding program. Cyclope (SA) is one of such kind. She is undoubtedly one of the most important mares in Interagro’s breed­ing program.