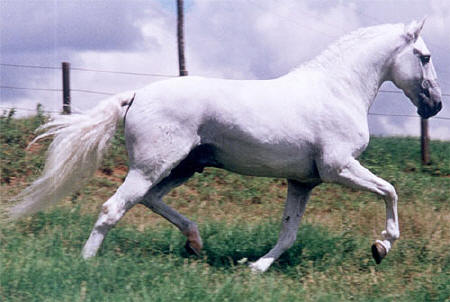 Danúbio III (MV) is son of Zimbro II (MV) and Oferta (MV) and thus a paternal brother of Dardo II MV and maternal of Venturoso III MV, both widely-known, having been imported by Brazilian breeders.

Zimbro II (MV) is now in Mexico, where he became the main stallion of Coudelaria Gaston Saints. Through Zimbro (MV), Danúbio III (MV) is a grandson of Nilo (MV) and great-grandson of Firme (SA), another pillar of the breed like Danúbio III (MV) himself. In his pedigree thus, he shows 1/8 of Andrade blood, belonging to the highly demanded modern Veiga/Andrade lineage, started when Firme (SA) spent time at the Coudelaria Veiga.

Danúbio was one of the most impor­tant stallions bred by Manuel Veiga. He won several titles, including the most prestigious one of Champion of Champions in Lisbon (1987).

Danúbio III (MV) sired at Manuel Veiga and at Interagro the most fantastic progeny of the modern Lusitano breed, with sons like Ofensor (MV), Champion at Golegã at 4 years old and Champion head-of-progeny in Lisbon and Oceano (MV) who was imported into Brazil by Coudelaria Mito Lusitano. Both Danúbio III (MV) and Ofensor (MV) were imported by Interagro; the latter – now one of the main official stallions at Interagro – was used by his breeder Manuel Veiga (MV) and Sociedade das Silveiras (SS) where he sired the Grand Champion and Reserve Grand Champion of the 2004 Lisbon Show and his daughter who became Champion in Lisbon in 2002. Danúbio III (MV) sired two top-quality official Interagro stallions: Quixote and Quantum Interagro.

Be the first to review “Danúbio III (MV)” Cancel reply