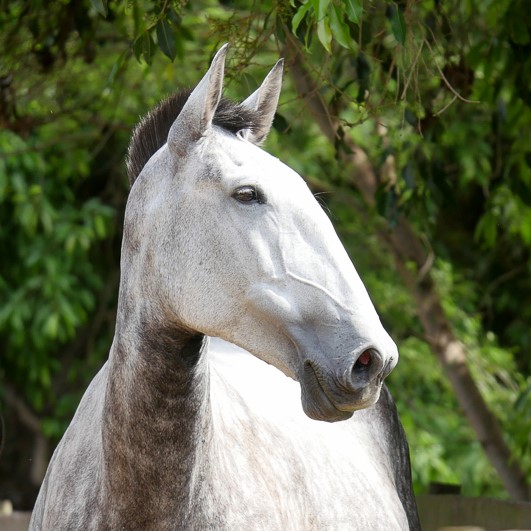 Distinguished mare revised with 74 points resulting from in-breeding in Capicua (MLC), the dam of the multi-award winning Nirvana Interagro.
Daughter of the late Leda do Mirante, a tall mare with wide gaits that was reacquired after being sold at the 5th Top Interagro Auction in 1996. Leda was the daughter of the Great Brazilian Champion Apolo do Mirante and Capicua, bred by Mr. Manuel Lopo de Carvalho. Leda’s pedigree brings the best and most sought after in the CN lineage, such as Broquel (CN), Mimosa (OS), Innato (DLR), Hucharia (CN) etc.
Her sire, Nirvana Interagro, was an Andrade/CN Stud stallion with an extensive successful career in classical dressage having competed in Brazil, the USA, France and Germany. Producer of highly sportive animals not only for Dressage, but also for Driving and Working Equitation; being that his sons also show a lot of skill for the Jumping.