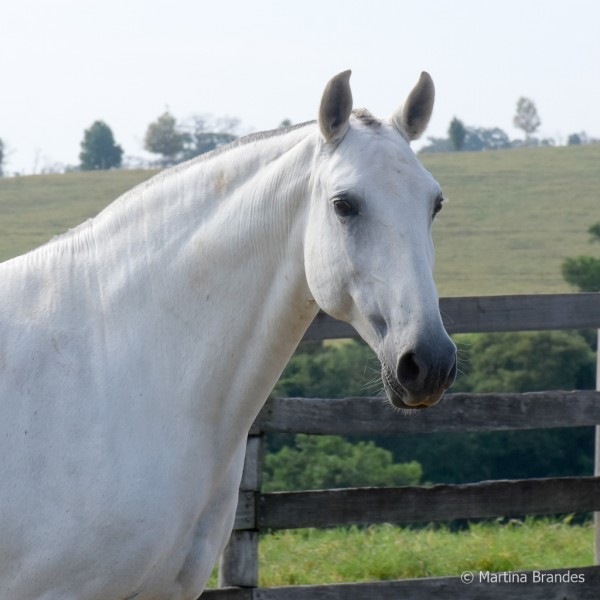 Issa is a daughter of Duna II Interagro, brood mare revised with 72,50 points out of Quinata Interagro, one of the most important broodmares of Interagro’s breeding program, revised with 74,50 points she produced the Dressage Champions Hector Interagro, sold to the US and Baldor Interagro, Vigia Interagro (sold to Australia), Gardênia Interagro, Calêndula Interagro, Duna II, and Esfinge Interagro, all mares included in Interagro’s breeding program. Duna´s sire is Ofensor (MV) who not only won the highest morphology prize – Great Champion of the Golegã fair in 1999, but, what is much more important for the ranking of a stallion, the Sire-Progeny Great Championship in Lisbon and Brazil.

Sired by Quixote Interagro, a paternal brother of Ofensor (MV), both by the fabulous Danúbio (MV), a stallion used by Interagro to promulgate the exceptional characteristics of this lineage. On his dam’s side, Quixote is a son of Dançarina (RC), daughter of Venturoso III (MV) by Xinesa (RC) who is a daughter of Pandeireta (MP), one of the greatest brood mares in the Lusitano breed. Both Danúbio (MV) and Venturoso III (MV) have Oferta (MV) as their dam, thus introducing an important consaguinity and a fantastic pedigree. Quixote was revised with the high mark of 79 points, including receiving a 9 for his terrific gaits. He displays extraordinary conformational qualities, a striking beauty, charisma, and magnificence combined with excellent gaits, temperament. He typically produces extremely elegant and athletic horses, many of which have been very successful in dressage, paradressage, and working equitation.  Quixote’s superior qualities have earned him a reputation as one of Interagro’s most important stallions. The proven combination of the Quina blood into the offspring of Danúbio (MV) has created a diverse and exceptional opportunity to breed extraordinary horses for the dressage arena. These individuals have consistently outperformed the other bloodlines in all the essential points demanded in the stringent selection process carried on by Interagro, and therefore continue to grow in the select group of Interagro broodmares.

Be the first to review “Issa Interagro” Cancel reply