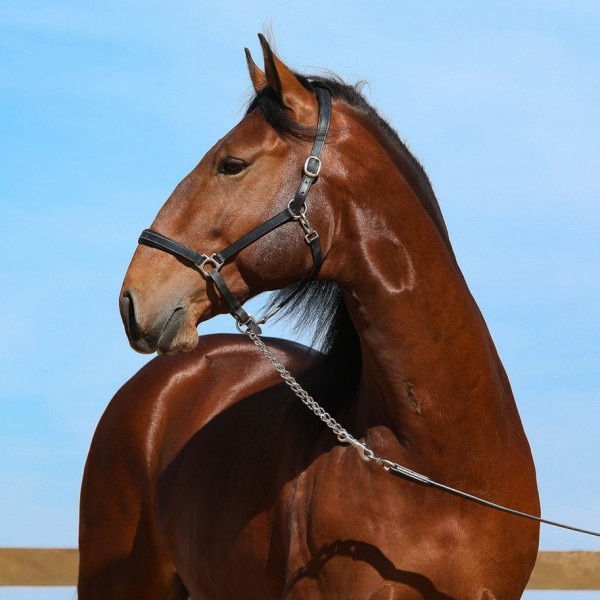 Matutino a striking, handsome, and ideally built bay gelding boasting three very correct gaits and a loving, eager to please temperament. He is super concentrated in his work and takes pleasure in his training, complimenting his looks with exceptional rideability. Because of his wonderful temperament and eagerness, he is recommended to competent amateurs despite his young age.
Profano Interagro, Matutino’s sire, was the Gold Medalist at the 1998 and 2000 International Shows in Brazil, and has produced a wealth of exceptional offspring:
– Zizifo Interagro: Dressage and Paralympic Dressage, including the 2016 Rio Paralympics
– Xaveco Interagro: highly decorated in Working Equitation in Brazil and the US, including Champion at the 2016 Working Equitation World Cup
– Dressage: Hectar Interagro, Zico Interagro, Zoilo Interagro, Zulu Interagro and Horácio Interagro
– Working Equitation: Estoico Interagro, a palomino who was sold to the US, Gótico Interagro, also sold to the US, and Francis Interagro
Matutino’s dam, Abdera, is a top producing mare with three daughters in Interagro’s breeding program. She also produced the outstanding Lusitano Interagro, sold at the 15th Interagro Yearlings Auction in 2015 and Esparteiro Interagro, who sold to the US.
Abdera’s dam is the gray Ociosa Interagro, a gold medal winning mare revised with 77 points. And her sire, Nicola (MAC), is a striking buckskin stallion who passed away in 2019 at 25 years old. Nicola was famous for his offspring, which were easily distinguished by their straight-forward, sweet temperaments and incomparable rideability. Several of his offspring have won important prizes in North American and Brazilian National Shows.
Nicola MAC’s sire, Hábil (MV), is a Veiga stallion from the Firme (SA)/Nilo (MV)/Novilheiro (MV) lineage; he has produced some exceptional sons at the Coimbra’s, including Perdigueiro (MAC), now standing at Interagro. Nicola’s mother, Heroína (MAC), is a daughter of Distinto (MAC), a grand champion mare in Lisbon. Both Distinto (MAC) and Hábil (MV) were exported to Brazil. Nicola (MAC) stamps all of his male and female offspring consistently, producing healthy, conformationally correct, beautiful, and forward-thinking horses.

Be the first to review “Matutino Interagro” Cancel reply