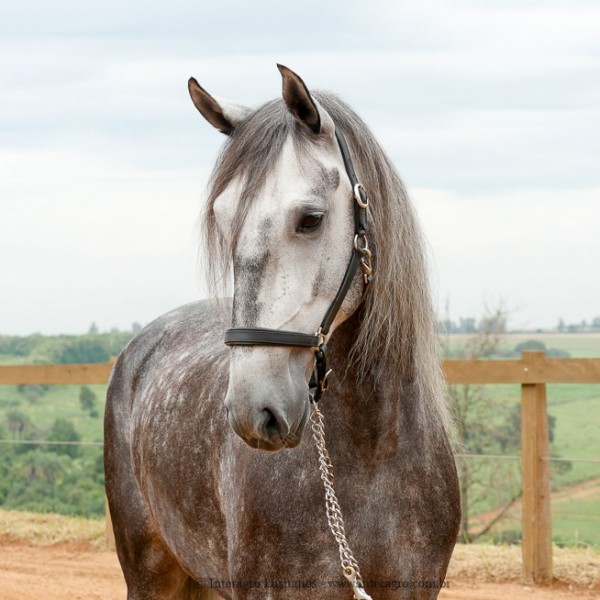 Extremely beautiful grey gelding, Meursault is very typical and docile. He has the three basic gaits correct and is still sensitive to the aids, he is recommended to experienced amateurs due to few months under saddle.

Sired by the beautiful bay stallion Quínio Interagro, revised with 74.50 points and Gold medalist at the 1999 International Lusitano Show in São Paulo, Brazil. Quínio is the tallest and probably the one with most striking presence of Xique-Xique (CI)´s sons. His dam, Cyclope (SA) is a daughter of Vidago (SA), a very famous stallion grandson of Martini (SA).

Meursault´s dam Freda Interagro is a mare of 100% Veiga bloodline, daughter of Ofensor (MV) who not only won the highest morphology prize – Great Champion of the Golegã fair in 1999, but, what is much more important for the ranking of a stallion, the Sire-Progeny Great Championship in Lisbon and Brazil. Freda´s dam Mina (MAC) was bred by the Coimbra Stud Farm in Portugal, sired by Distinto (MAC) prized in Portugal and Brazil and out of Dior (MAC), both by Zangado (MAC) giving Mina a consanguinity of high genetic level.

Be the first to review “Meursault Interagro” Cancel reply