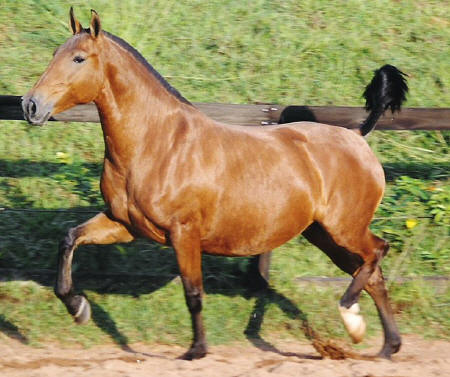 Mulata is a full sister to awarded Narsil Interagro, both by Xique-Xique (CI).

The dam Biluca do Mirante is probably the most important among the founding mares of the Interagro herd. Twice National Champion winning a collection of Gold Medals at International Exhibitions. But more important than her conformation awards is her career as a brood mare. Biluca do Mirante had 14 products, all of them exquisite for their functional qualities, among which we can highlight: Narsil Interagro, champion of Working and Portuguese Equitation, exported to the USA; Lindir do Mirante, winner of show jumping, Plutônio Interagro, sold to South of Brazil and its daughters, Nagaika do Mirante, Mulata Interagro and Formosa (BFI), all of them Gold Medal winners, the first two of which were exported to the US and the third, Formosa, is the mother of the National Champion Kiwi do Mirante.