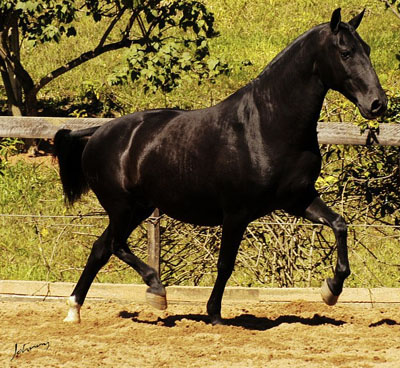 Beautiful black mare imported from the Coudelaria José Palha in Portugal. Nêspera (JPP), was sired by the Veiga stallion Gingão (MV) and by a Palha black mare, Estada (JPP), who in turn was sired by a black stallion, Gafanhoto (OC), from the Coudelaria Ortigão Costa, which is dedicated to breeding black Lusitanos. Nêspera (JPP) left an Interagro progeny of six, five blacks and one buckskin, all very beautiful and athletic.