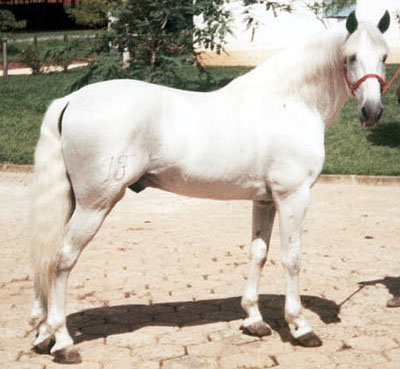 Bred by the well known Portuguese Coudelaria Barata Freixo, Níquel (BF) was the founding stallion of Interagro, where he served from 1976 to 1988. Níquel is son of Selecto CN, a stallion of the best Spanish ancestry, grandson of Primoroso DH, Destinado DH and Cartujano APT, the first two being among the “head of lineage” of the Lusitano Stud Book, and the latter being one of the founding stallions of Coudelaria Andrade. Níquel’s dam, Joeira (BF), was one of the most important brood mares within Barata Freixo, where she had an extraordinary offspring with individuals such as Níquel and Bronze (BF), the latter also imported by Interagro. Among the offspring of Níquel there are six of the most important mares that formed the genetic basis of the Interagro Lusitano: Biluca (many times National Champion), Dama, Diva, Ema, Eva and Ela, all of them National Champions, Gold Medals bred by Interagro

Be the first to review “Níquel (BF)” Cancel reply