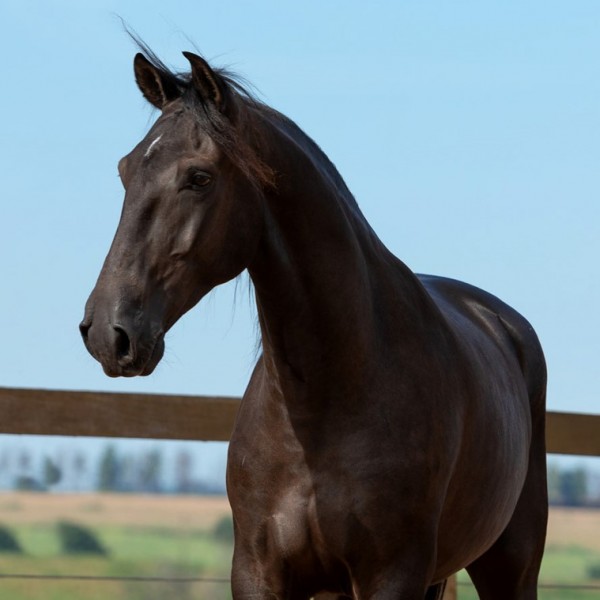 Gorgeous black young gelding with elastic and wide gaits with great impulsion/drive. Osmond is very calm and focused in his training, he is a quick learner, talented and extremelly skilled. He started under saddle mid-October 2020 and is already ridden in an open ring as well as trail rides around the farm.

Osmond is from the first generation of Fellini´s offspring under saddle. Fellini Interagro is a black stallion from two of the most successful lineages in the Interagro genetic program; he is a son of the multi-award winning Nirvana Interagro, the first Brazilian bred Lusitano to be selected for the Pan American Games and out of Batina Interagro, a daughter of the Ofensor (MV). Following in the footsteps of his sire, Nirvana, Fellini was the Brazilian and São Paulo State Dressage Champion in 2016 (Young Horses 6 YO), in addition to the horse responsible for the prizes “Brasil Hipismo” of Pia Aragão in 2016 and 2017 in the 6 and 7 Year old Horse divisions  respectively.

His dam, Abdera Interagro, is a top producing mare with four daughters in Interagro’s breeding program: Fenícia Interagro, Gazuza Interagro, Inércia Interagro – approved at the end of 2019 with 79.50 points – and Joeira Interagro. Among their male sons, Esparteiro Interagro and Matutino Interagro stand out, both sold to the USA and Lusitano Interagro, the most valued foal at the 15th Interagro Yearlings Auction in 2015.
Abdera’s dam is the gray Ociosa Interagro, a gold medal winning mare revised with 77 points. And her sire, Nicola (MAC), is a striking buckskin stallion who passed away in 2019 at 25 years old. Nicola was famous for his offspring, which were easily distinguished by their straight-forward, sweet temperaments and incomparable rideability. Several of his offspring have won important prizes in North American and Brazilian National Shows.
Nicola MAC’s sire, Hábil (MV), is a Veiga stallion from the Firme (SA)/Nilo (MV)/Novilheiro (MV) lineage; he has produced some exceptional sons at the Coimbra’s, including Perdigueiro (MAC), now standing at Interagro. Nicola’s mother, Heroína (MAC), is a daughter of Distinto (MAC), a grand champion mare in Lisbon. Both Distinto (MAC) and Hábil (MV) were exported to Brazil. Nicola (MAC) stamps all of his male and female offspring consistently, producing healthy, conformationally correct, beautiful, and forward-thinking horses.

July 2021 video (under saddle) available upon request, please email us at interagro@interagro.com.br