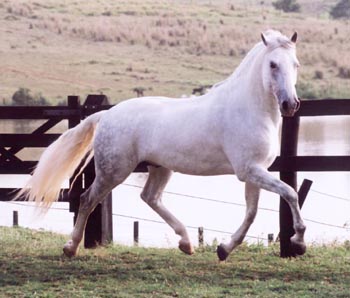 An extraordinary stallion of great genetic power, descended from some of the most famous Lusitano ancestors on both, male and female lines. His sire, Yacht SA, is the most famous and long-lived among the great Andrade stallions sired by Martini SA, son of Príncipe VIII FCN who was the basis of formation of this famous basic lineage of the breed. Yacht SA is the only survivor amongst these notable and historical stallions, as both his other brothers Urco SA and Zamorim SA have already passed away. Yacht’s SA progeny sums more than a hundred individuals born in Brazil and in Portugal, where he served in well-known Coudelarias Veiga and Campilho, besides his birthplace, Coudelaria Andrade. Querer’s dam, Kidnapped SA is an outstanding female who has been producing extraordinary stallions, such as Querer and his brother Olorin Interagro, among others of a lesser age which will surely to be included into the Interagro official stallion group. Kidnapped SA is daughter of Rapinada SA, the latter being the dam of above mentioned Zamorim SA.