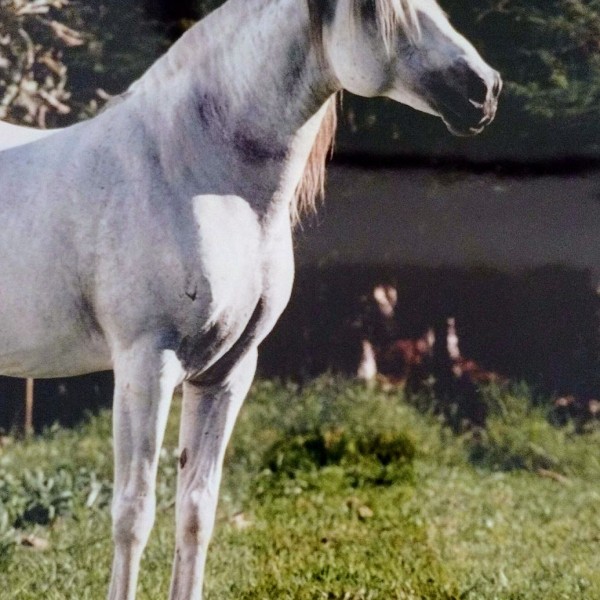 Born in 1980, at the moment when the existence of the famous Quina Stud was coming to an end in the aftermath of the Portuguese Revolution of 1974, Xique-Xique (CI) was chosen by Dr. Guilherme Borba as the stallion to be used on the remaining Quina mares kept by Mr. Alfredo Conde, the bullfighter who assisted Manuel Quina in the establishment of his famous Coudelaria. The political and economical situation in Portugal after the Revolution was not favorable to horse breeding and the difficulties suffered by the Portuguese breeders forced the sale of some outstanding animals while many others were lost by bad handling. Xique-Xique was not an exception; he was abusively used in bullfighting when still very young and unprepared and passed from hand to hand until being acquired by the Barata Freixo family, who sold him to Interagro in 1988. At that moment, the present cult for the Quina horses did not yet exist and, therefore, the astronomic prices commanded today by these extraordinary animals were not practiced by the market so that our happy, prolific and predestined association with Xique-Xique began with a lucky strike. It was only after the huge success of Interagro’s offspring of Xique-Xique that the Portuguese and Brazilian market realized the quality of these animals and their prices consequently exploded. Xique-Xique, was during eight years – from 1989 to 1996 – the head figure in the Interagro lineage program. Leaving an offspring of more than one hundred show winning individuals who soon achieved a huge success in the dressage and other competitive arenas. Xique-Xique’s blood flows in practically all the Interagro horses. Xique-Xique was a Gold Medal Champion in Lisbon and was given 81 points at revision by the Portuguese Stud Book. The most important testimony of his importance is given by the number of his sons that became very successful stallions at Interagro: namely, Noblíssimo, Quínio, Quinárius and Olorin Interagro; 22 of his daughters are presently included in our brood-mare group. Four of his daughters and eight sons have been exported to the U.S. With Xique-Xique CI, Visqueiro CI, and some older Quina mares and their offspring, Interagro was able to continue the breeding of this otherwise extinct lineage. We consider it to be one of our most precious and treasured assets, in great measure responsible for the extraordinary quality achieved by the Interagro horses. It is with a mixture of sorrow and gratitude that we render our best homage to the extraordinary stallion. We are sure that Xique-Xique was very proud of his offspring, and had he lived longer, he would not have had any doubts in transferring his huge responsibility to these glorious, outstanding heirs.

Be the first to review “Xique-Xique (CI)” Cancel reply