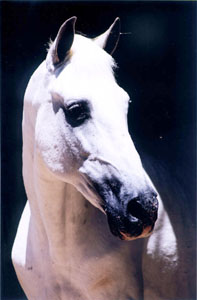 Yacht (SA) is one of the most important stallions in the Lusitano breed at all times; his name will be forever inscribed into the Hall of Fame of outstanding stallions who have made the Lusitano the fabulous horse he is today.

Yacht SA is son of Martini (SA), the son of Príncipe VIII (FCN) who was the foundation of the Andrade (SA) lineage. Three of Martini’s sons, Yacht, Urco (SA) and Zamorim (SA) were responsible for the preservation of Príncipe VIII’s blood in the Andrade horse. Of the three brothers, Yacht was the most fertile, produced until 2005, more than 150 descendants in Brazil and Portugal. Before being imported by Interagro, Yacht served in several Portuguese breeders, among whom, Manuel Veiga (MV), Arsênio Raposo Cordeiro (RC), Isabel Holstein Campilho (IC), Lopo de Vasconcellos (FLV) and Raul Telles de Carvalho (TC). Yacht is the only stallion still alive who has served in two of the most famous Portuguese breeders, Manuel Veiga (MV) and Andrade (SA), both basic lineages of the Lusitano breed. Yacht also served at non-Portuguese breeders in Europe, L. Duff, Guy Gidde and Rex Henry among others.

Yacht himself, and many of his descendants won several dressage competitions in Portugal. Some of Yacht’s sons and grandsons became very important stallions in Portugal and in Brazil, among whom, Dragão II (SA), Galeão (SA), Ícaro (SA), Fado II (MV), Farol (IC) and mares like Gavial (SA), Haste (SA), Habilidosa (SA), Idiota II (SA) (all of them imported by Interagro) and also Íris (SA), Ignavia (SA), Darmstadt (SA), all from the Andrade SA stud. Amongst his famous and prized grandsons are: Gatão (JHC) and Faraó (JHC), both imported by Interagro, Faisão (CFR) and Inca (RC). Yacht’s superb athletic qualities – so typical of his lineage – have been passed on to many of his sons and grandsons, like Obtuso Interagro (son) and Nirvana Interagro (grandson), both Brazilian Dressage Champions. Up to the year 2005, Yacht has sired offspring of over 100 at Interagro, of which, 17 are now included into the very selected group of Interagro brood-mares.