João Oliveira:
“Interagro is not only the largest breeder of the Lusitano but the horses have a quality that has been proven in different disciplines. Interagro imported some of the best stallions and mares from tested breeding lines in Portugal. The continuation and development of the Lusitano breed is an important part of my culture and as a Portuguese rider I’d like to thank Paulo Gavião Gonzaga and his family for promoting and evolving the Lusitano horse in a new era.”

Joao Oliveira – the son of Nuno Oliveira – pictured above working with Maverick Interagro at Robinson Lusitanos of Idaho.

Andre Ganc is a professional competition rider with a string of accolades in Brazil including: Brazilian Vice-Champion in the Five Year Horse Category and São Paulo State Champion in the same category; three times winner of the Functional Competitions promoted by the Brazilian Lusitano Association (ABPSL) in the Top Class and in the Young Horse series. He also won a number of São Paulo state competitions and was chosen several times as the rider of the year by the Brazilian Lusitano Association (ABPSL). He explains the attraction of the Lusitanos.

“There is a continuous demand for good horses, of adequate size, with expressive movements and an easy temperament for training also requiring character, intelligence and charisma for the competition market.

“I have always found these qualities in the Lusitano breed and they have an unequalled ability to train that makes my work a real pleasure.

“Because of the recent excellent performances of Lusitanos combined with the higher intelligence of these horses, soon we are going to see them reaching positions of great prominence in international competition.

“I am privileged to train some Interagro horses of excellent potential. Thanks to their unique genetic patrimony derived from the novel breeding system developed by Interagro, I have been given access to excellent horses with whom I have obtained the best results of my riding career.”

(Ganc is also a member of the Jury and of the Revision Committee of the ABPSL as well as a Teacher of “Horse Training and Utilization” at São Paulo University.)

Punk Carter is a former President of the National Cutting Horse Association (NCHA) and recently took on the experiment of training two young Interagro horses for the Cutting Horse Arena. He was impressed with what he found.

“They just took to it. I was worried that they were supposed to be aggressive toward the cow… because of the bullfighting and all. If their natural instinct was to be pretty aggressive towards the cow, I was worried that, if a cow got too close to them would they use that aggression again? But they don’t seem to do it with their cutting. No matter what kind of training you give them, they take it. They accept it and that’s what I love about them. They’re really good-minded horses.

Preferido Interagro, a five-year-old stallion owned by Robinson Lusitanos won Horse of the Year 2000 in the Beginner/Novice Level of the Combined Training Association’s Area nine. His trainer was Rick Levin, whose considerable experience in three-day eventing had not involved working with Lusitanos until Preferido came along

“I was a little skeptical,” Rick said. “But the more I work with them [Lusitanos], the more I like them and the better they get. They’ve got a good temperament and boldness – which is paramount in eventing.

“They’re being judged against Thoroughbreds and Warmbloods and I think they’ll do quite well.

“We started [Preferido] with dressage and went on to school him over cross-country jumps. He ended up loving it. He gives off a regal impression in the ring.

“He also has stamina. We went to one event in Colorado when it was 106 degrees. Horses and people were feeling the heat while Preferido hardly broke a sweat.”

“As soon as I saw the horse I fell in love with him,” says Earlene Dacus of Texas, who is having fun riding and schooling her young Interagro stallion, Pioniero. “I’ve worked with a lot of different breeds and the Lusitano is the easiest and kindest to work with.” Earlene is just one of many horse lovers who have found their dream horse in a Lusitano. As this picture shows, they make great companions on a trail ride. 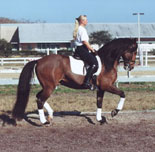 Dressage Trainers
In the USA

Grand Prix dressage rider,Silke Rembacz took over the training of Montezuma do Mirante – a striking bay Interagro Lusitano´ stallion – when he was seven years old. Since then the pair has competed at the Winter Equestrian Festival in Palm Beach, Florida and has won in third and fourth level competitions on the North Eastern US dressage circuit.

“Do I think Andalusians and Lusitanos are suitable for dressage? Yes I do. They are being bred a little bit different now which is what [Interagro] is trying to do [with Lusitanos] – breed a sport horse, a horse that has a little bit more of a down but also an up and out movement. They [Lusitanos] have tremendous potential for piaffe, better than a warm blood that is bred in a way that is pushing forward through, have the extensions, have the changes. It is something that a lot of the Andalusians and Lusitanos had, and now they are breeding them with this in mind. I’ve seen some of the videos of the action of the horses in Brazil and I think there are some really promising young horses in there. I think Paulo [Gavião Gonzaga] is going about it in the right way by taking time to develop a type that is really suited to dressage.”

Silke Rembacz grew up in Germany and competed on the European dressage circuit before coming to the USA. Now a US citizen, Silke spends her summers in New Jersey from where she competes on the East Coast dressage circuit. In the winter she moves to Florida and the highly competitive Palm Beach Equestrian Club dressage season. She has trained several horses for Grand Prix and competed successfully herself, with the help of her trainer and US Olympic rider, Robert Dover.

Former President of the National Cutting Horse Association, Punk Carter, has two Interagro Lusitanos in training and is pleased with the results so far. 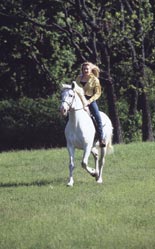 The Lusitano is the easiest and kindest to work with,” said one owner, who, like the rider pictured above enjoys trail riding and having fun on horseback.