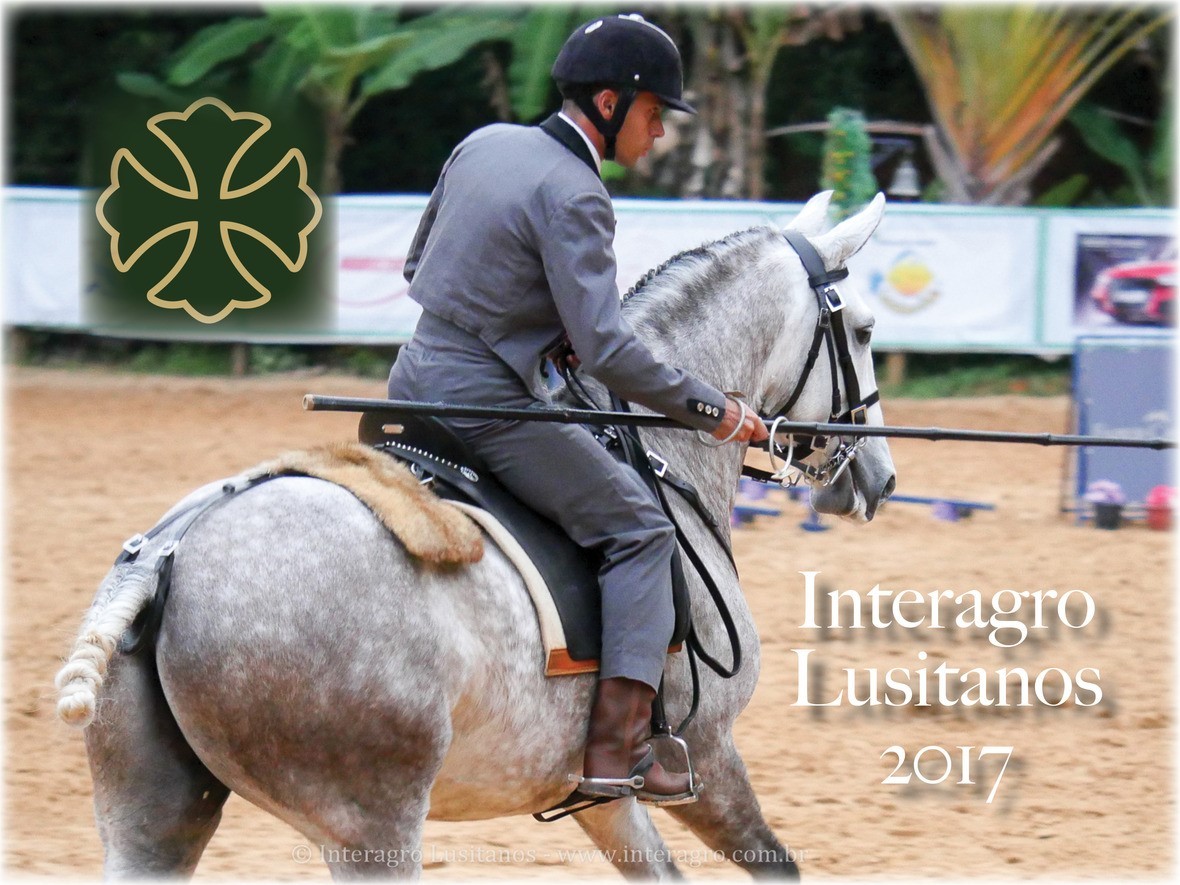 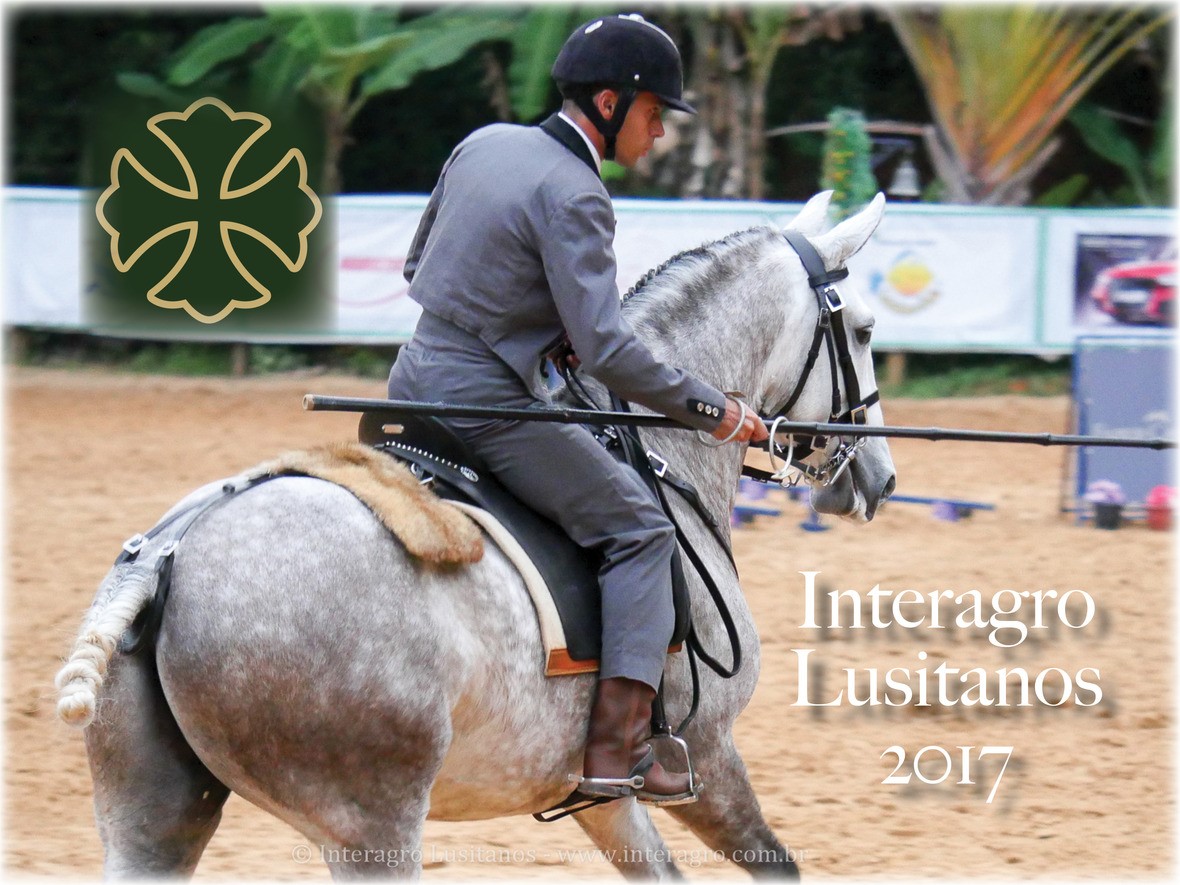 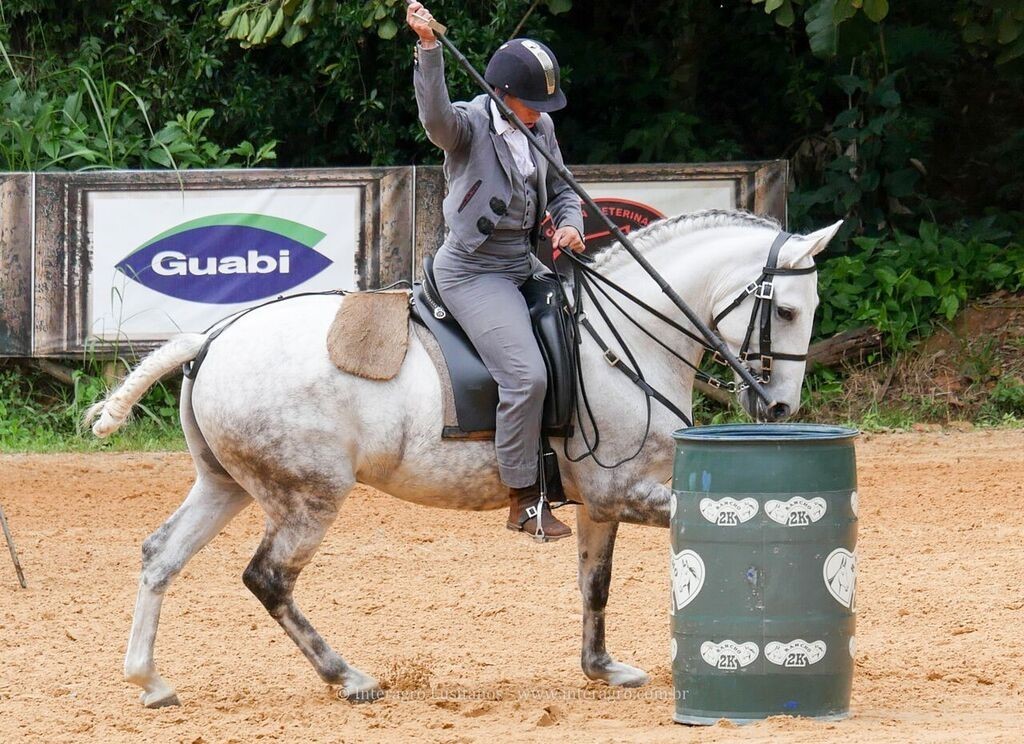 Itapira, SP, Brazil (May 14, 2017) – In a test of speed, precision, agility, and partnership, Brazil’s 2017 Working Equitation Championships combine the country’s passion for horse sport with the traditional working practices of their rich equestrian culture. The horses and riders of Interagro Lusitanos of Itapira, Sao Paulo, Brazil are known for their versatility, excelling in disciplines from driving and dressage to jumping and Paralympic events. This responsiveness to the rider and the athleticism to compete at the international level is what grants the Interagro Lusitano success in working equitation. In late April, Interagro’s team traveled to Hipica Manege Alphaville in Santana de Parnaiba, Brazil for the second round of championship working equitation competition.

Working equitation tests the horse and rider partnerships in three phases: dressage, speed, and ease of handling, which get progressively more complicated as the riders advance. At levels ranging from Cavalos Novos A, or Novice A division for horses new to working equitation, to the more advanced Preliminary and Intermediate levels, Interagro bred horses consistently ranked at the top of the standings. Hector Interagro, with Alexandre Souza at the reins, finished first in the Novice A division for the second time this year. Tackling a variety of obstacles and challenges requiring focus, athletic ability, and faith in his rider, Hector Interagro, at only 6 years old, displayed the poise and talent typical of Interagro’s herd. With Phase 2 only being the gelding’s second show, the elegant grey also finished at the top of the Novice A division during the first phase of the 2017 Working Equitation Championships in March.

Click here to watch Hector Interagro’s winning round in the Novice A division! 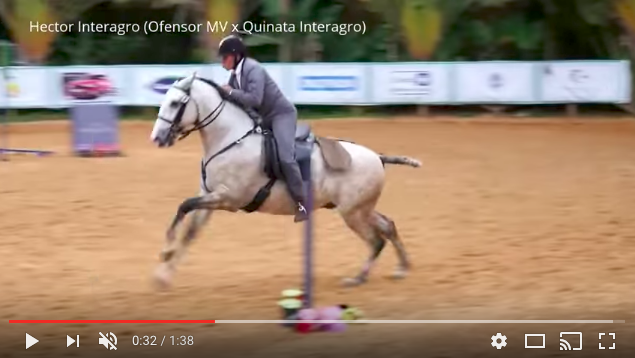 Helio, Herodotus, and Heliodoro Interagro, three more of Interagro’s H generation 6-year-olds, also competed to top finishes in Novice A. Helio Interagro and Johnny Miranda put in a fast and accurate performance to finish third, while Herodotus and Heliodoro, piloted by Edmar Brito and Fabio Lombardo Jr., finished fourth and fifth. Heliodoro Interagro was sold as a yearling in the 2012 Interagro Yearlings Auction and is now owned by Alexandre Siqueira. The Novice B division saw Alexandre Souza pilot another Interagro horse to a top finish; this time aboard the impressive Eros Interagro, Souza captured 6th place.

In the Preliminary division, where technical requirements and complexity of the courses demand more of each combination, Souza also guided Feitor Interagro to third place. Feitor was the youngest horse in the class at 8 years old, was competing against much more mature horses up to 14 years old. The winners of the Preliminary division, Xama Comando SN and Rafael Grumann, held a connection to Interagro as Xama, a powerful buckskin, was sired by one of Interagro’s top breeding stallions, Nicola MAC.

The Intermediate and Open Amateur divisions also hosted a number of horses bred, sold, or related to Interagro. Colirio das Mangueiras, a son of Tufao Interagro and Venus Interagro owned by Haras das Mangueiras, finished second in the Intermediate class with Sergio Antunes de Oliveira at the reins. Third and fourth went to two more Interagro breds, Bilbo Interagro and Porfirio Interagro, both ridden by Marcio Aparecido de Almeida and owned by Haras das Mangueiras. In the Open Amateurs, Fronteiro Interagro and Jose Luis Fernandes finished fourth overall. Fronteiro is the maternal brother of the Novice A victor Hector Interagro, and was sold during the 2010 Interagro Yearling Auction. Xama Comando SN, the son of Nicola MAC who was victorious in the Preliminary division, also made his mark in the Open Amateurs. Maria Isabel Casimiro piloted Xama, who is owned by Coudelaria Amor e Cura, to a fifth place finish.

Click here for a full list of Interagro horses and their results at the 2017 Brazilian Working Equitation Championships!

For more information on Interagro Lusitanos, Interagro’s horses for sale, or the Lusitano bloodlines, visit Interagro’s website at www.lusitano-interagro.com or follow them on Facebook. To organize a trip to Brazil or for any questions regarding sales or the logistics of importing horses to the US, do not hesitate to contact Interagro.

All photos courtesy of Interagro Lusitanos