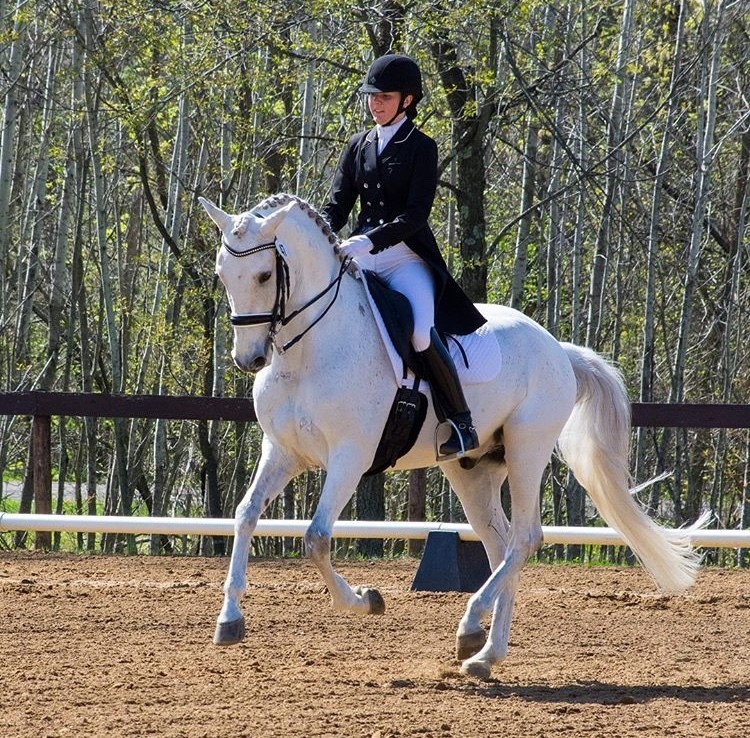 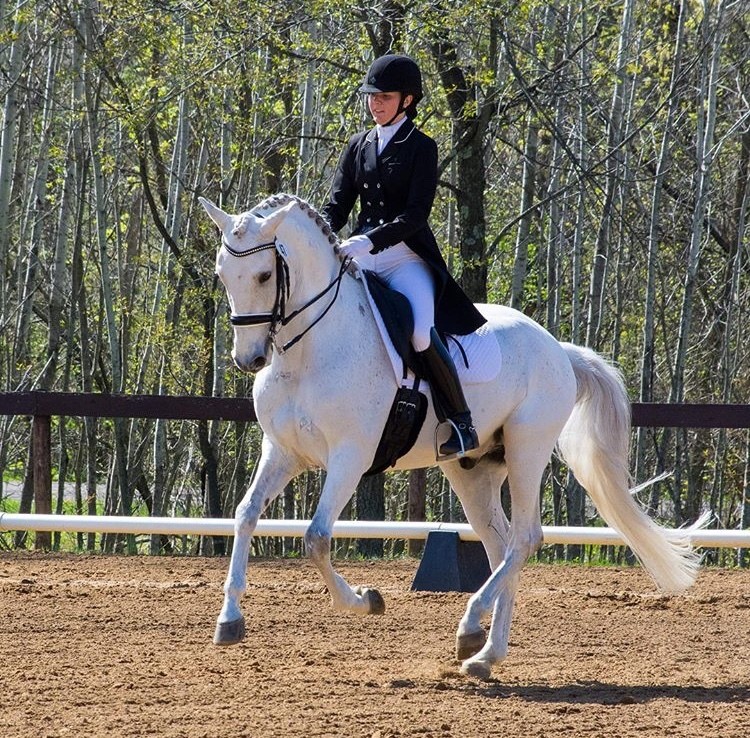 North Salem, New York (September 7, 2018) – Winning Team Silver on a silver horse was a dream come true for Annika Tedlund; in her first ever Junior/Young Rider Championship effort, Tedlund and the 17-year-old Lusitano gelding put in strong scores at the USDF North American Young Rider Dressage Team Championship, held during the 2018 Adequan/FEI North American Youth Championships in North Salem, New York. With scores through 67%+, Tedlund was the second highest scoring of her four team members for the combined team of US Regions 4 and 7.
Tedlund began her relationship with Vade-Mecum three years prior. After trying him on her birthday in Wellington, she stated that he was different from any horse he had ridden before and he was purchased by her mother, Linnea Tedlund, for Annika to campaign with the goal of qualifying for and competing in the Juniors and Young Riders. Bred and trained by Interagro Lusitanos in Itapira, Sao Paulo, Brazil, Vade-Mecum Interagro is by Noblíssimo Interagro and out of Pecúnia Interagro. Noblíssimo Interagro is by the celebrated Lusitano stallion Xique-Xique (CI), and maintains a legacy of successful sport competition and highly decorated offspring. With wins at the FEI level in Brazil and the US, Vade-Mecum was no exception to this legacy.

Tedlund, with the help of her trainer Alison Sader Larson, began the long road of perfecting the Young Rider test and earning qualifying scores. Working on Vade’s fitness, as well as Tedlund’s execution, the pair progressed quickly and Tedlund notes that Vade’s exceptional temperament, willingness, and ride ability were major factors in their success, including their own personal best score of 67.029%. “Vade felt amazing at the show, and every day he got better and better,” said Tedlund. “Getting Team Silver was incredibly exciting, and Vade was really excited to be in the arena but stayed focus on his job! After two days we were ranked in the top 18 so we were able to do our Freestyle, which I wasn’t expecting as it was my first time at the Championships. We had a few little mistakes but I’m thrilled with Vade and our results. He really gave it all he had the whole week.”

While Vade is all business in the ring, Tedlund also noted his wonderful personality in the barn as well as under saddle. “Every single time I hop on him just gets better,” she said. “He tries so hard to do everything right and loves to show off. He’s very supple, and the lateral movements come easy for him, which made it easy for us to up the degree of difficulty in our Freestyle. He also collects very well and his piaffe is exceptional. His intelligence makes training him very easy for me; we do an exercise once He never acts up at the show, likes to go hacking even after being inside all winter, and is a total goof around the barn. He just loves being with people and enjoys grooming time. He loves to be pampered. Vade also gets very attached to his rider, and I think this contributes to him trying so hard in training and at shows.”

Naturally Tedlund’s goals with him are to move up the levels, with the ultimate goal of competing in the Grand Prix, but she also thinks another trip to the Young Rider Championships isn’t out of the question: “[The Championships] were an amazing experience. Being part of a team was something I really enjoyed and would like to do again. I loved being with riders my age that were competing at the same level as me, and who were all so skilled and talented. The horses were amazing to watch, and riding in front of 5 judges was really a unique experience. It definitely left me craving for more, and I’d also like to show in Wellington. I can’t thank my trainer enough for her guidance; her time and effort helped us come so far and reach my goals. With her help I achieved beyond what I ever could have expected at our first big show. I’m very lucky to have such a great horse, a great trainer, and supportive parents.”

For more information on Interagro Lusitanos, Interagro’s horses for sale, or the Lusitano bloodlines, visit Interagro’s website at www.lusitano-interagro.com or follow them on Facebook and Instagram (@interagrolusitanos). To organize a trip to Brazil or for any questions regarding sales or the logistics of importing horses to the US, do not hesitate to contact the farm in Brazil.