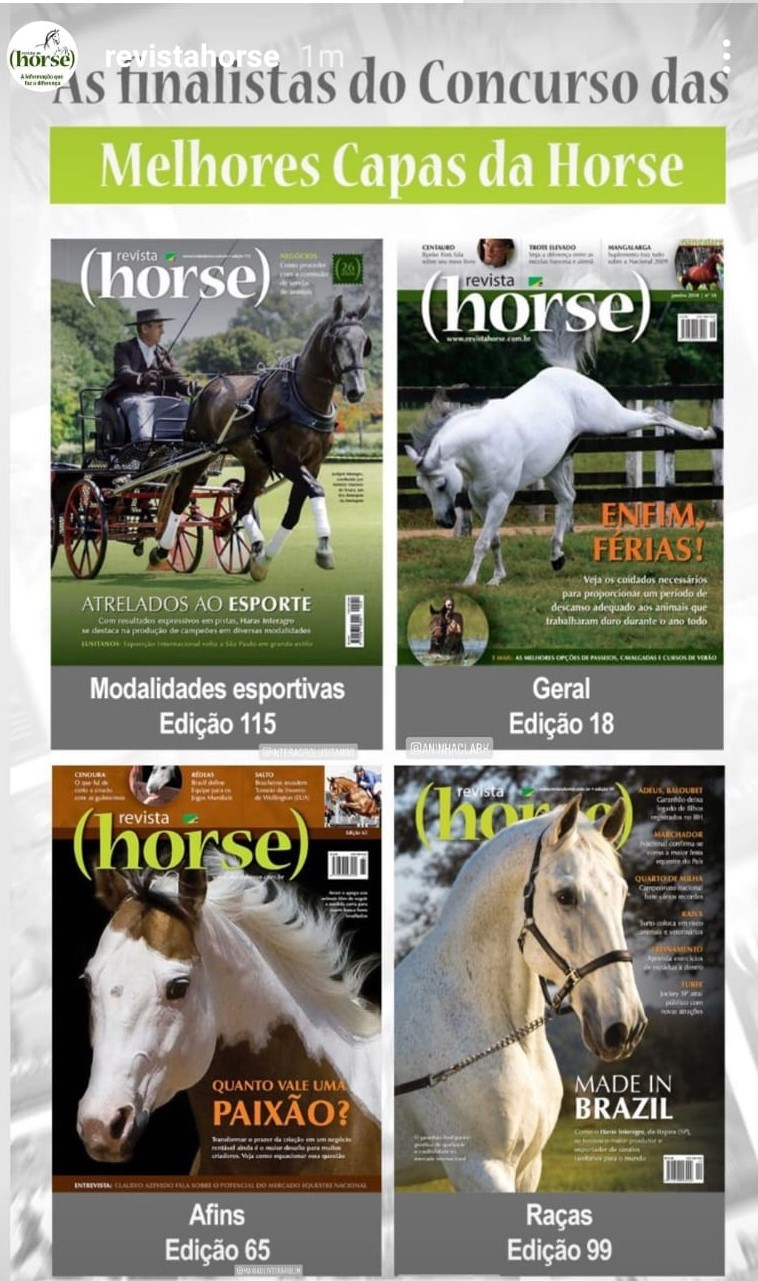 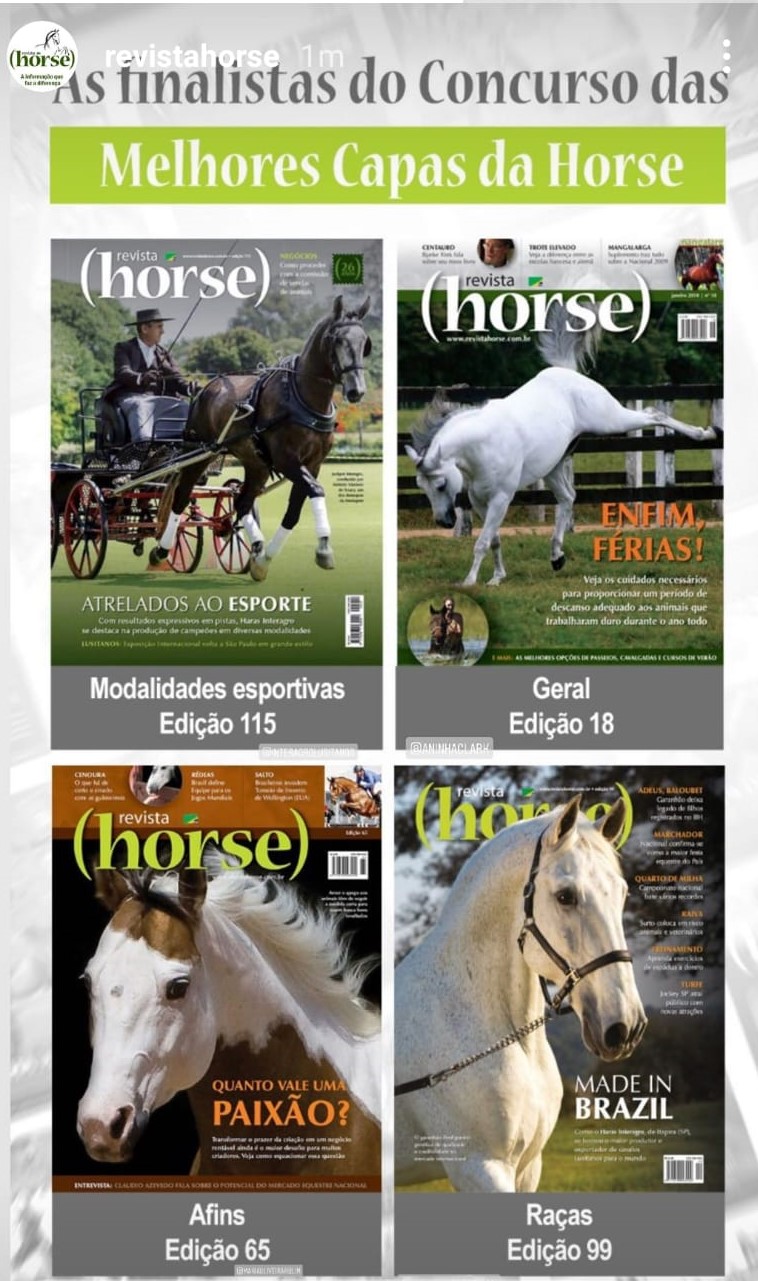 Since July, the Brazilian Horse Magazine “Revista Horse” has been engaging Instagram users across the world with their “Best Magazine Covers” contest!  Over a hundred covers were selected to participate and divided into four categories: Breeds, Sports Disciplines, General, and Miscellaneous.

Interagro was directly represented by a number of these covers, including Edition 99, highlighted by the Lusitano stallion Perdigueiro (MAC).  Bred by Assunção Coimbra Stud Farm in Portugal and photographed by Tupa, Perdigueiro cover was the winner of “Breeds” category representing the Purebred Lusitano on August 13th with over a thousand votes.

Interagro also had three other Lusitanos of its brand competing at this contest: Jackpot Interagro, driven by Interagro’s Antonio Souza, won the Sports Discipline category representing the carriage driving, photographed by Heleno Clemente for the cover of Edition 115.

Having been a part of Team Interagro for almost 2 decades, Antonio trained in Portugal with Jorge Sousa in 1994 and took a Driving Course at the Coudelaria de Alter in 1998.  In 2014, Antonio was trained by Mr. Rui Quintino de Oliveira from Portugal and in 2016 attended clinics with Mr. Jorge Baixo from Portugal at Larissa Farm in Brazil. He dedicates himself to the whole range of Driving activities, from breaking youngsters to the most advanced training. His first test in Brazil was a four-in-hand, but these days on the farm he harnesses 6, 8 and 10 animals together.  He now also gives tutoring courses to coachmen and horses and is a great wealth of knowledge and information for Interagro.

Antonio won the prizes “Hipismo Brasil” in 2017 and 2018 in the Single Professional division with Jackpot who was sold in 2019 to Monsanto Stud Farm in the 1st Ares Lusitanos Auction promoted by Virtual Stables.

Antonio’s parter for the Sport Discipline cover, Jackpot Interagro, is the last son of the highly decorated Nirvana Interagro and the black mare Naranja do Mirante, who scored 80 points at her revision and is the mother of Varanja Interagro and Zampano Interagro, who were sold to the US, as well as Apache Interagro who was sold to Canada.

In the General category, the Lusitano Bailos Interagro reached the finals with the cover of Edition 88. published originally in December 2015.  Photographed by Fagner Almeida at Haras Godiva, located in Jose Ignacio, Uruguay, Bailos is owned by Mr. Mauricio Delucchi who lived in Itapira for years as Interagro´s head trainer. When Mauricio returned to his home country of Uruguay, he took with him the young grey stallion sired by Noblíssimo Interagro and Dona (RC), beautiful mare bred by beloved Architect Arsênio Raposo Cordeiro, by Venturoso III (MV) and Saloia II (MV), a daughter of Guerrita (MV) the mother of the mythological Novilheiro (MV) with Nilo (MV).  In addition to Bailos, Dona (RC) also produced the International Working Equitation Champion Xaveco Interagro, sold at the auction Leilão Coleção Interagro 2006.

The elegant mahogany bay gelding was originally photographed by Tupa in Brazil before being exported to the US.  Esparteiro is owned by Mrs. Carol Epstein.  His dam is one the most prolific broodmares of Interagro: Abdera Interagro, a black daughter of Nicola (MAC). Among Abdera´s offspring there are three adult mares included in our breeding program: Fenícia Interagro, Gazuza Interagro and Inércia Interagro all by the same crossing that generated Lusitano Interagro (by Zíngaro Interagro), record price of the 15th Interagro Yearlings Auction in 2015. Another promising son of Abdera was also sold to the USA: the talented bay gelding Matutino Interagro by Profano Interagro. Abdera´s youngest son in training is Osmond Interagro, black gelding by Fellini Interagro.

The semifinal is scheduled to September 23rd starting at 2 pm Brazil time (1 pm Miami time) and the finals to the 29th at the same time. Voting is at @revistahorse story on Instagram and it´s stays active for 24h only (as all stories do!). Please join us in voting for Interagro’s fabulous horses and the gorgeous covers of Revista (horse)

01.Sept.2012 – Richebourg Interagro is the cover of Dressage Today Magazine

18.June.2008 – Noblíssimo Interagro is the Cover of 2008 IALHA Stallion Directory