Our “Home Page” horse, featured at the opening of this web site is Yacht from the Andrade lineage. Interagro imported him from Portugal. Up to the year 2005, Yacht has sired offspring of over 100 at Interagro, of which, 17 are now included into the very selected group of Interagro brood-mares.

The striking grey stallion’s photogenic qualities have put him on the cover of three magazines to date including Brazil’s “Millenium Stallion Guide”.

Perhaps the most effective description of the Andrade bloodline comes from the breeder himself, Ruy d’Andrade:

“…they are short strong horses, valiant with the bulls, changing from calm to ardent if spurred and from ardent to obedient if left in peace; fast when running and rapid on turns; with good walk, sensible to the spurs, submissive with good mouth, endless strength in everything.”

The selection process used by Andrade differed from that applied to the Veiga lineage according to Alfredo Baptista Coelho who writes: “Contrary to Manuel Veiga, [Ruy d’Andrade] started from a solid morphological base and tried to retain the most subtle qualities.”

The Coudelaria Andrade – as we know it today – was formed with the stallion Principe VII, from Francisco Chica Navarro (FCN). He was a grandson and great grandson of the “chief of line” Primoroso.

The Veiga bloodline produced the most genuine war horse of Ancient Lusitania. ‘Veigas’ are extremely functional and smaller than the other lineages – excellent for bullfighting.

They have the typical convex head known as the “Veiga head”, flat thin legs with prominent hocks, fantastic impulsion and proud flexible necks.

Manuel Veiga describes his horses as follows: “Nervous, full of gallantry, so obedient they seem to outguess the rider’s intentions; high thin head, long free-flowing manes, elevated movements and a striking agility challenging all threats and dangers with indomitable courage…”

The Veiga is a true race within the Lusitano breed and the stallions when used on mares of any other lineage have the power to transmit to the offspring the most typical characteristics of the Lusitanian race.

The selection criterion was based entirely on the functional qualities, as explained by Alfredo Baptista Coelho:

“… not the height, nor the academic morphology, not the color, nor the form of the head. Everything was offered by the race itself: wonderful fine slightly convex heads today known as “Veiga head”, ancient rare colors … fine flat legs with strong hocks, flexible backs, uncommon impulsion, beautiful malleable necks … in short, the race offered him [Mr Veiga] a horse that makes our horse loving people vibrate.”

The horse bred by the Coudelaria Nacional (CN) is of the same morphological type as the Spanish Horse of the XVIII century. This explains why most of the present and old lines of the CN are of Spanish origin – mostly descendants from the “heads of lineage” Hucharia, Primoroso and Destinado.

The Coudelaria Nacional produces longer, stronger horses, with high croups that are very good for dressage and driving.

The Lusitano Breed in Modern Times

The above description of the three basic bloodlines does not suffice as a final taxonomy of the Lusitano horse.

Many traditional and important breeders exist and they are producing excellent animals, either by keeping the three basic lines or combining them with great success. More recently the intermarriage of Veigas and Andrades, both extremely functional horses, produced some of the most famous stallions of the last quarter of this century: Neptuno, Opus, Novilheiro and Trinco, all sons of Firme (Andrade) with Veiga mothers.

The 1989 edition of the Portuguese Equine Genealogical Book (Stud Book) recognizes six “heads of lineage”, one mare and six stallions, that had an important contribution to the formation of the present Lusitano herd.

These “Line Chiefs” are the founding fathers/mother of the three main lineages of Lusitanos:Andrade, Veiga and Coudelaria Nacional, each line differing from the others by variations in individual characteristics, but all strictly framed within the race standard. 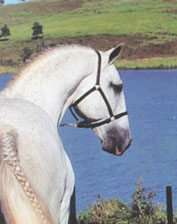 Emir II was the first pure Veiga to be exported to Brazil and still stands at the Interagro stud. In this picture he shows off his striking ‘Veiga’ head.

Vardasca, born March 1979, is the oldest mare at the Interagro stud in Brazil. She has historical importance as the first mother of pure Veiga foals born outside of Portugal. Photo: Arquivo Interagro

The famous show jumperNovilheiro, bred by Manuel Veiga and therefore carrying his brand, was out of a Veiga mare by an Andrade stallion. British Grand Prix rider, John Whitaker ‘discovered’ him and together they formed a formidable partnership in the show jumping world. One of his direct progeny, the stallion Gengis Khan, is now stabled with Peter Van Borst. Photo: Bob Langrish.

The following are a few of the many famous Andrade stallions: Cofre, Martini, Eneias, Firme, Zamorim, Urco and Yacht, the latter serving as a breeding stallion at the Interagro stud since 1993.