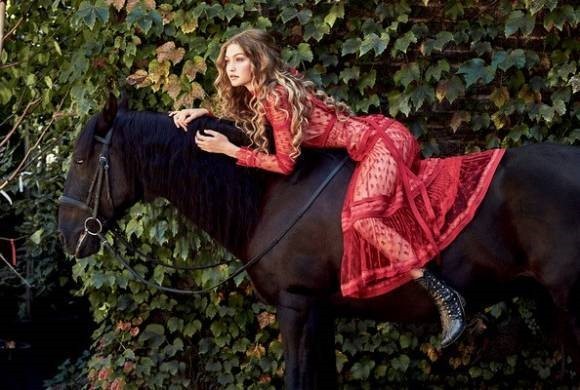 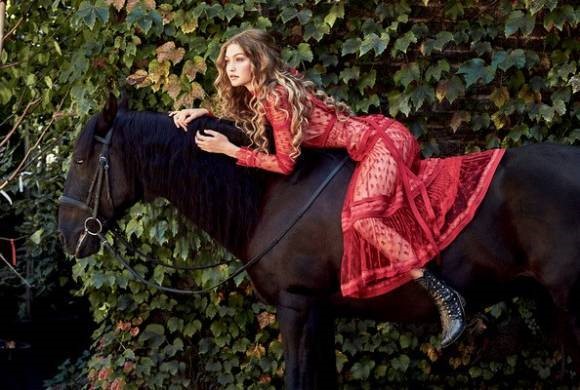 New York, NY (December 8, 2016) – Chiseled features, lustrous locks, and elegant forms are typical of any photo shoot for Allure magazine, and in the 2016 December issue an equine supermodel sported his ravishing good looks alongside 2015 Model of the Year Gigi Hadid for Allure’s feature spread. The 21-year-old Hadid posed au naturel while reclining on Zulu (who was also au naturel) in a stunning black and white image that has become the cover photo for Allure magazine’s Facebook page as of mid November. Hadid, who is also the 2016 December issue cover girl, appears at ease on the 14-year-old Lusitano gelding, despite the lack of clothes. Zulu’s photogenic baroque appearance and laid back attitude made him the epitome of the equine supermodel.

Bred by Interagro Lusitanos of Sao Paulo, Brazil, Zulu Interagro (Profano Interagro x Trovoada Interagro) was imported to the US in 2008 as part of the Lusitano Collection International Horse Auction held in Wellington, Florida. Zulu’s owner, Athene von Hirschberg, came to the Auction looking for a versatile, compact, athletic horse and found what she was looking for in Zulu. Over the years she and Zulu have competed up to the FEI levels in dressage, working equitation, 15-mile rides, hunter paces, and eventually began his career as an equine supermodel. Zulu’s photogenic qualities were first utilized by Italian fashion designer Emilio Pucci, who featured the black horse in a spread at the International Polo Club Palm Beach, posing with two models in Pucci’s flagrant designs on the polo fields. Von Hirschberg’s friendship with Cari Swanson of Cari Swanson Productions, which has provided horses for major motion pictures such as Hidalgo, Winter’s Tale, and The Horse Whisperer, served as the catalyst to launch Zulu’s modeling career into the big leagues. Swanson received the casting call for a horse of Zulu’s temperament and appearance for the major international fashion magazine, and von Hirschberg was more than happy to oblige.

“He handled the entire ordeal like a pro,” said von Hirschberg. “Obviously he was required to stand and remain calm for a long period of time, with people in various positions and bright camera flashes, but he took it all in stride and even got bored and began nibbling on his handlers. His personality and athleticism set him apart, and he really does anything I ask of him.”

In addition to competing through the Prix St. Georges level in dressage, Zulu has also been a champion competitor in working equitation, a discipline mirroring the techniques utilized by working horse and rider pairs and requiring a diverse range of talents. For Zulu’s breeder, his combination of beauty, athleticism, trainability, and an exceptional temperament are a reflection of their breeding program, which has spent over 40 years carefully developing the modern Lusitano sporthorse. Zulu’s sire, Profano Interagro, is a son of the famous Legendario do Mirante. Legendario’s sire, Novilheiro MV, made history in some of the most prestigious show jumping arenas of Europe under the guidance of Olympic Silver Medalist John Whitaker. The Lusitano stallion was an international show jumping champion and one of the most famous Lusitanos of all time, with a career that included winning the British Showjumping Championship and leading the European rankings for prize money earned. Profano’s influence in many Interagro pedigrees has yielded top performing dressage, driving, and equitation horses, including a 2016 Rio Paralympic mount in Zizifo Interagro.

But despite their accomplishments in the show ring, Zulu’s ancestors probably never had a nude supermodel lounging on their backs, a unique and impressive addition to the resume of Interagro’s progeny.

Click here to read more about Zulu’s shoot for Allure!

Visit Allure on Facebook to see Zulu as their cover photo!

For more information on Interagro Lusitanos, Interagro’s horses for sale, or the Lusitano bloodlines, visit Interagro’s website or follow them on Facebook. To organize a trip to Brazil or for any questions regarding sales or the logistics of importing horses to the US, do not hesitate to contact Interagro.