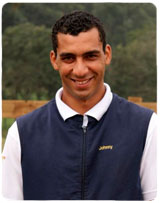 Started his career at Interagro aged 15 as an apprentice and today is one of the main riders at the “picadeiro”.  During this time, he was responsible for the training of some of our stallions, as Ofensor (MV), Quínio Interagro, Profano Interagro, Noblíssimo Interagro, and others.

From 2005 to 2007 had clinics with Johan Zagers, Belgian trainer established in Germany, together with Pia Aragão.

In February  2006 he made period of training in U.S.A. with Heather Bender and participated of the dressage season in  Florida assisting Pia Aragão with the horses Nirvana and Tufão Interagro.

Johnny was many times member of the team, that helped at the “Lusitano Collections”, in Wellington – FL.

He trains with Martina Brandes, and since 2013 participates in Working Equitation and Dressage Clinics with Jorge Sousa (POR) competing in both disciplines with great results – from Young Horses classes to Medium Tour – as shown below.

Since 2018 Johnny is responsible to start all the young horses of the farm.