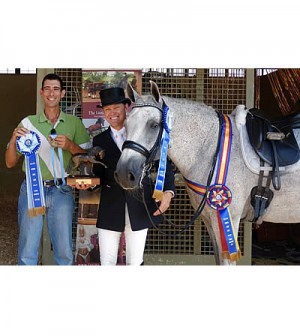 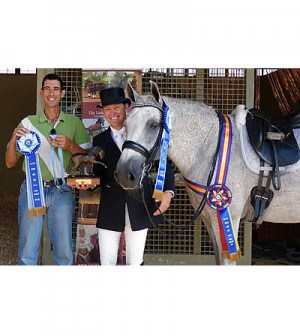 Three years ago, Loxahatchee dressage rider and public relations entrepreneur Johnny Robb took a trip to Brazil that permanently changed her equestrian life. She flew down to visit the Interagro Lusitano farm, a former coffee plantation in the hills about an hour and a half outside São Paulo and bought a beautiful grey Lusitano gelding named Zerbino Interagro.

John Zopatti after winning the Dressage Hack on Zerbino Interagro with owner Johnny Robb at the IALHA National Championships in Virginia. Photo provided

After years of training and hard work, Robb earned her United States Dressage Federation gold medal this year. She had a sensational summer, capping it off with a trip to the International Andalusian Lusitano Horse Association (IALHA) National Championships in Lexington, Va. the last weekend in August. “Zillionaire,” as Zerbino Interagro is known by Robb and everyone else on the circuit, excelled in every class, from lead line to ground classes to the grand prix, solidifying Robb’s affection for the Lusitano breed.

“I took three trainers with me,” Robb said of the championships. “Gary Yeager did all the halter classes. He did dressage sport horse in-hand. I showed in the amateur dressage gelding in hand, along with the dressage grand prix. Jaimie Amian helped coach me in the grand prix. My other dressage trainer, John Zopatti, came along to help. He showed Zillionaire in the dressage hack class and won the national championship in that. In every class we were in, we either got champion, reserve or top five. We had a really successful show.”

Robb loves Lusitanos, which were originally bred on the Iberian peninsula for war and bullfighting, for their loyalty, intelligence and kindness. Zillionaire easily switches from grand prix athlete to gentle schoolmaster, which is not something every horse is capable of doing. Six-year-old Ethan Yeager rode him in the lead line class during the championships.

“This horse loves kids,” Robb said. “If he had to pick between doing grand prix or lead line, he’d certainly pick lead line. He totally changes. He goes from being a bit buggy-eyed, because he knows he has a big job to do, to a sweet little button that knows he has a kid he has to protect. It says a lot about the disposition of these horses. They’re really smart and kind. People chose them as partners through war and bullfighting. They really take care of you.”

While she was at the show, Robb tried on traditional riding costumes and perused Spanish and Portuguese tack made specifically for the three Iberian breeds featured in the championships. She enjoyed being around other people who appreciate Lusitanos as much as she does.

“I wanted to buy everything, but I restrained myself,” Robb joked.

Robb uses the off season to refine her own riding technique. Once winter rolls around and the world turns its focus to Wellington for the Winter Equestrian and Global Dressage Festivals, she is too busy to work on her own dressage goals.

“During the season, I work so much with my business that I don’t get to show very much,” she said. “I really pushed this spring to get to do this. It’s been my national championship summer.”