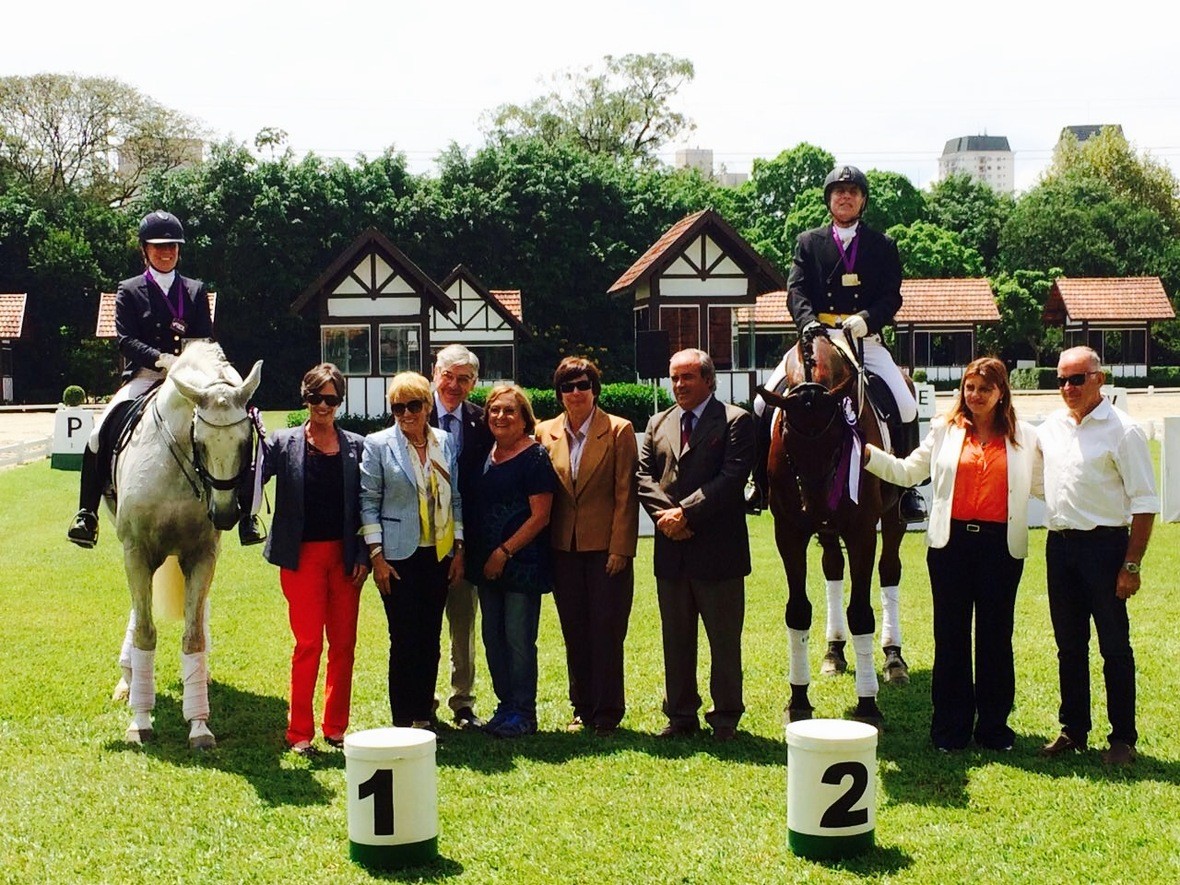 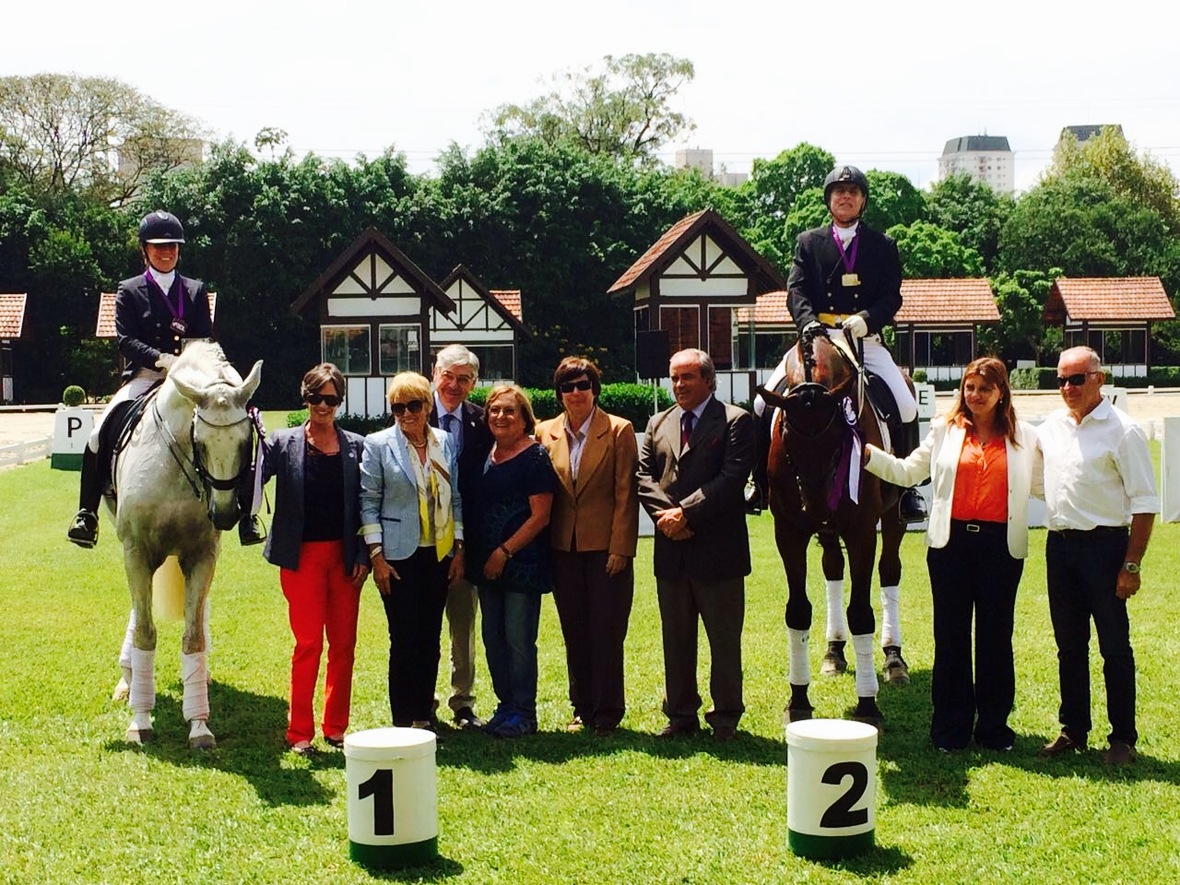 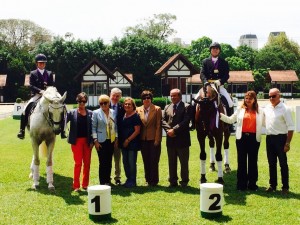 Baldor Interagro and Pia Aragão (far left)
during their award presentation for the CDI*** Sao Paulo  (Photo courtesy of Bruno Braghetta)
Itapira, Sao Paulo, Brazil (March 22, 2016) – From national rankings to CDI victory, Interagro Lusitanos built upon its already decorated history of show ring success over a banner weekend in late March of 2016. Multiple Interagro horses were honored for their performances in 2015 at the Troféu Eficiência, a regionally focused, yearly ranking that encompasses the entire state of Sao Paulo, while Brazilian and Swedish rider Pia Aragão swept the Small Tour at a the CDI3* Sao Paulo with Baldor Interagro, demonstrating their prowess in the upper echelons of international dressage.
Organized and presented by the governing equestrian federation of the state of Sao Paulo, the Troféu Eficiência ranking encompasses six equestrian disciplines and a variety of categories and levels. For the dressage ranking, which incorporates a minimum of 4 competitions, scores from horse and rider partnerships are averaged and ranked over the course of the year, with the highest being honored and recognized as exceptional through the Troféu Eficiência. Of Troféu Eficiência 2015’s 13 categories, 11 were presented to Lusitanos. Of that 11, horses bred by Interagro won two of the rankings: the Grand Prix and 5-Year-Old Division, highlighting the range and talent of the farm’s equine athletes. 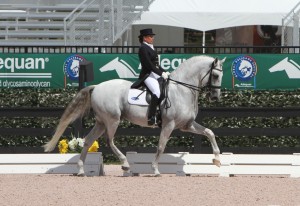 Zepelim Interagro, winner of the 2015 Troféu Eficiência,
competing at the Global Dressage Festival in 2015 (Photo Interagro Lusitanos)
Zepelim Interagro, bred and owned by Interagro Lusitanos and ridden by Pia Aragão, was in the limelight during the ceremonies with the highest combined average in the Grand Prix division. The elegant grey stallion (Quinárius Interagro x Ordenada Interagro) has also earned the top Brazilian national ranking in the Grand Prix, and will be officially presented with the award in May. The partnership of Zepelim and Aragão is well known to the Troféu Eficiência, as in 2013 Aragão and Zepelim were presented with the Sao Paulo ranking for the Small Tour, and as a young horse the talented stallion won the prize as both a 5- and 6-year-old. Aragão has also been the recipient of the Troféu Eficiência ranking many times with various horses at various levels, including Baldor Interagro, Vade Mecum Interagro, and Nirvana Interagro. Finório Interagro (Quixote Interagro x Altamira Interagro), ridden by Sara Godoy for Haras Crystal, won the FEI 5-Year-Old division, highlighting the talented young horse’s skills in dressage. 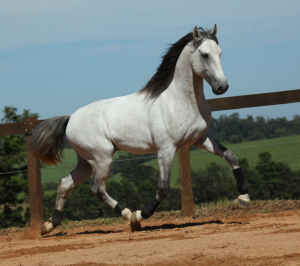 “It is always an honor to win the Troféu Eficiência, and to be recognized for your accomplishments in this art and for your knowledge of the sport,” said Aragão. “Zepelim had a great year in 2015, scoring the highest in our Grand Prix Freestyle, and I’m looking forward to continuing to develop him in 2016.” Aragão bookended the honor of receiving 2015’s Troféu Eficiência with three days of victory at the CDI3* Sao Paulo with Baldor Interagro. The pair swept the Small Tour with scores through 68% in the Prix St. Georges, Intermediare I, and Intermediare I Freestyle. Fresh off a long summer break, Baldor stepped right back into the show arena in winning form despite only 5 Small Tour starts in 2015 and a season of breeding in Brazil. “Because he had such a long time out of the international competition arena, he was a bit fresh and lost his concentration the first day,” said Aragão. “But in general he was fantastic to ride, with the mind, athleticism, and movement to be a competitor at this high level of dressage. My goals going forward are to build on this with the end result of increasing our scores and producing more wins.”

Horses in the South: Unicorns for HD Electricity: Desordeiro Interagro Stars in UK Commercial
A visit to Interagro