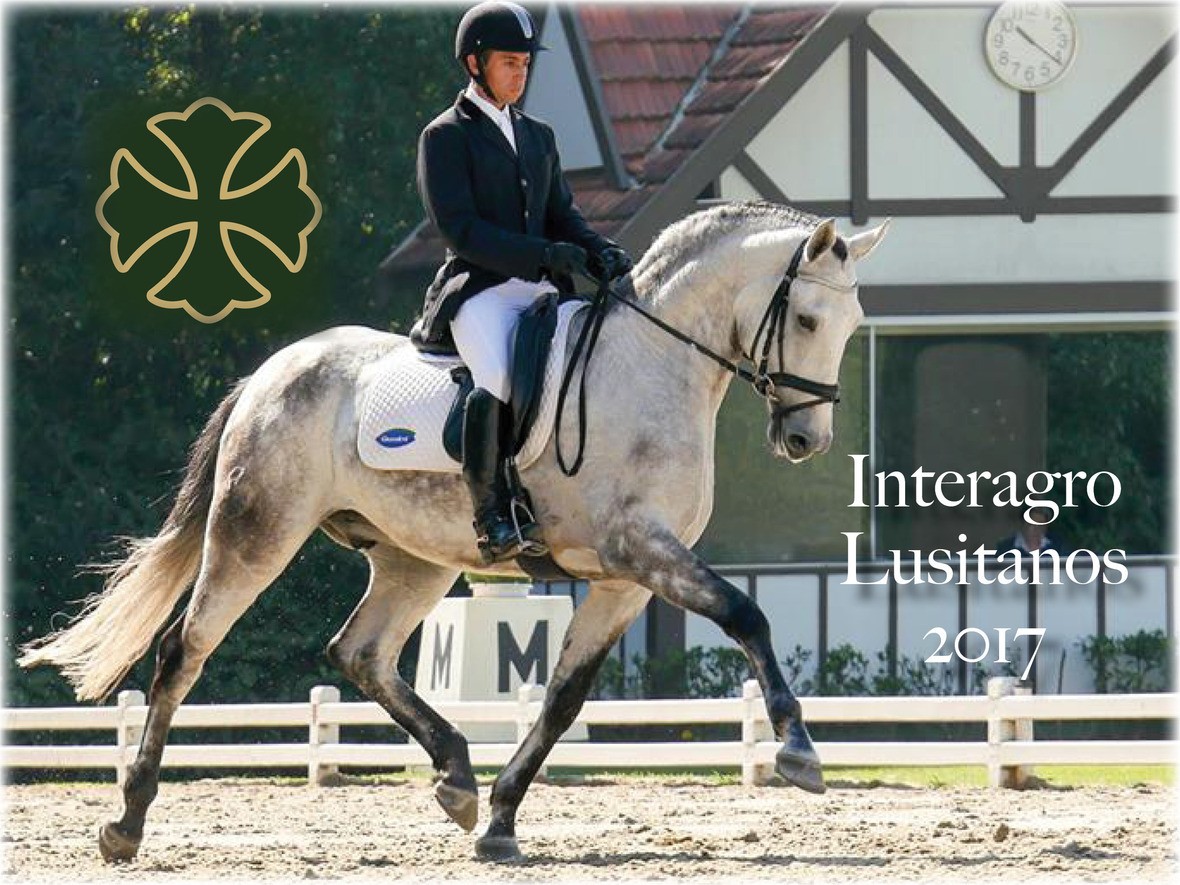 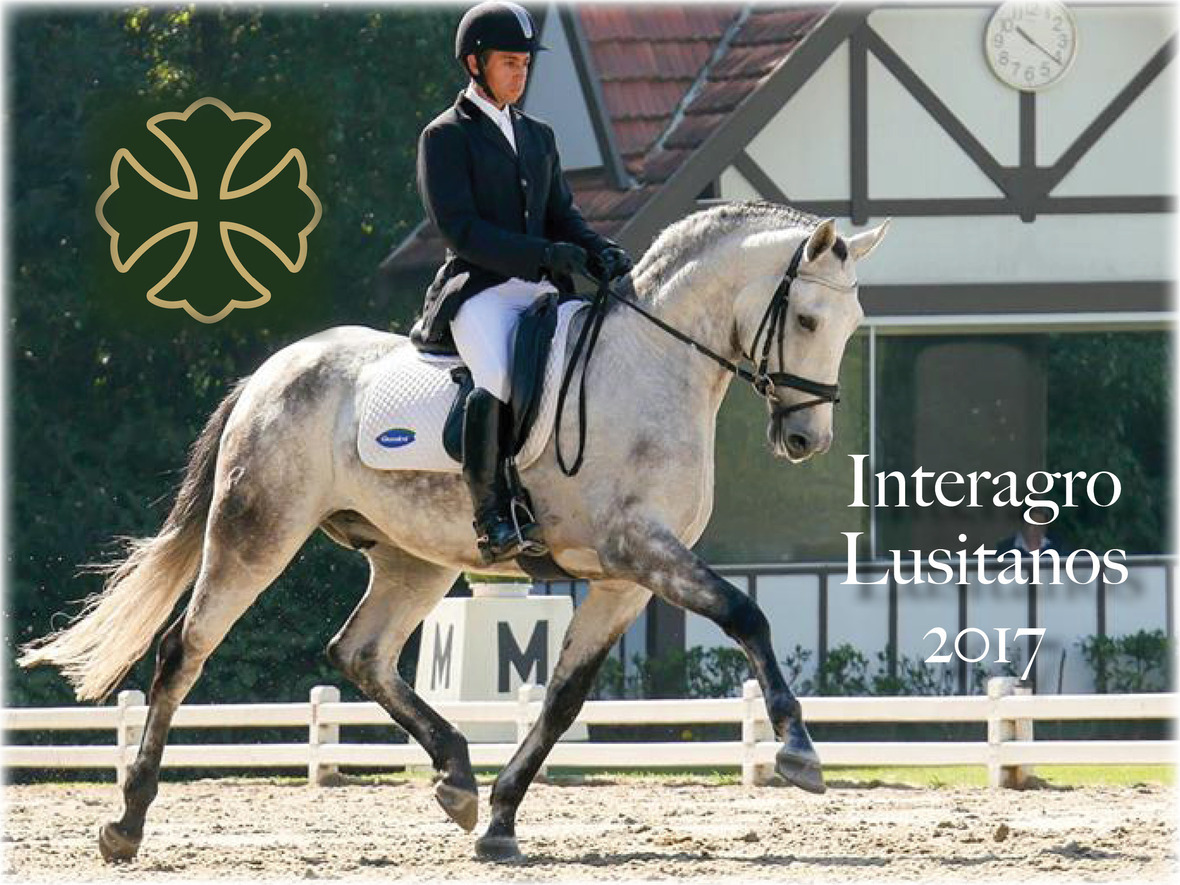 The First Level class saw the uphill and elegant Idálio Interagro win the day, scoring a 68.889% with Edmar Brito at the reins

Itapira, SP, Brazil (July 11, 2017) – The second leg of the 2017 Interagro Dressage Ranking once again showcased the variety and depth of Team Interagro’s dressage talent, with young horses from their H, I, and J generations, as well as older horses, demonstrating their skills in Training through Fourth Level. Hosted at the 1,300 acre training and stud facility in Itapira, Brazil on June 13, 2017, the Ranking serves as a baseline reading for Interagro’s show team and sales horses’ competitive performance, identifying the strengths of each pair as well as areas to be improved. This progression benefits both Interagro’s team of riders as well as their herd of Lusitano sporthorses as they develop their competitive careers. And the Ranking is not limited to Interagro’s dressage talent: as the driving and working equitation disciplines also feature dressage phases, the event offers them a a deeper understanding of dressage and new vantage point to finesse their skills within their disciplines.

Judge Colonel Marcio Navarro de Camargo presided over the tests, scoring the horses in the mid to high sixties. The Ranking was organized by the Brazilian stud and training center in conjunction with international dressage rider Pia Aragão, who has trained and campaigned Interagro horses through the FEI level, including Brazilian Small Tour Champion Baldor Interagro. “I was very pleased to once again see all of the riders scoring well on young horses or horses new to dressage as well as our more seasoned horses,” said Aragão of the Ranking results. “The Ranking is a great way for the young horses and riders to develop the mental and physical fitness to compete, as well as accustom them to the routine of a dressage show. I think at the end of the year after all 4 of these events we will be able to see how each horse and rider develops their competitive skills, confidence, and fitness level.”

Indus Interagro, with Edmar Brito in the saddle, scored 67.609% at Training Level to win the class. Soon after his win in the ranking, Indus was sold the USA and exported in early July

Interagro’s H, I, and J horses, the youngest three generations under saddle, made up the bulk of the Training, First, and Second Level rides. Indus Interagro, with Edmar Brito in the saddle, scored 67.609% at Training Level to win the class. Soon after his win in the ranking, Indus was sold the USA and exported in early July. Just behind him was Hermus Interagro, also ridden by Brito, with a 66.597%, and Janitor Interagro and Alcimar Godoi in third with a 65.652%. Antonio Souza and Jackpot Interagro took fourth with a 65%, and Jair Souza guided Firmador Interagro, one of the farm’s day-to-day working horses, to fifth on 64.130%.

Hectar Interagro and Alexandre Souza took second in the First Level test with a 67.593%

Third and Fourth Level during the Ranking included some of Interagro’s more advanced competitors and sales horses, including Caudilho Interagro, a breeding stallion ridden by Alexandre Souza. The pair took first place at Third Level with a 67.576%. Fourth Level was won by breeding stallion and working equitation champion Empreiteiro Interagro with a 66.486%; the impressive bay stallion used the same collection and power required to navigate the obstacle course and dressage phase of working equitation to tackle the challenges of upper level dressage. Second in the Fourth Level division also went to Alexandre Souza, this time aboard Feitor Interagro, another working equitation champion, with a 66.081%.

Aragão, who began her dressage career in Sweden before moving to Brazil, believes that holding these realistic dressage rankings prepares the horses and riders both mentally and physically for actual competitions. “To create an even more realistic environment, we load the horses into the trailer and train for the jog as well, creating a truly genuine atmosphere for the horses and riders,” said Aragão. “This allows them to grow and learn for the next step in their career, whether its competing for Interagro or finding success with a new owner. It’s very important in training to set goals and have an impartial judge to provide feedback. And of course I am always thrilled to see Baldor’s offspring and watch them follow in their sire’s footsteps. They are quite outstanding in both quality and gaits, and are true athletes.”