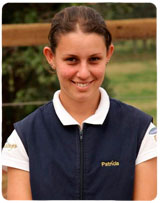 She is the first woman to join the Picadeiro’s Team since the beginning in 2005.

In 2006 she started presenting horses in Auctions and competing in Dressage under Pia Aragão’s supervision.

She had clinics with Johan Zagers, Belgian trainer established in Germany, together with Pia Aragão, from 2005 to 2007. And from 2006 – 2011, also had clinics with Mrs Heather Bender (USA).

From 2013 to 2016 she participated in clinics with Jorge Sousa (POR) and currently helps to take care of Johnny Miranda’s adult horses.

Patricia competed with the following horses: