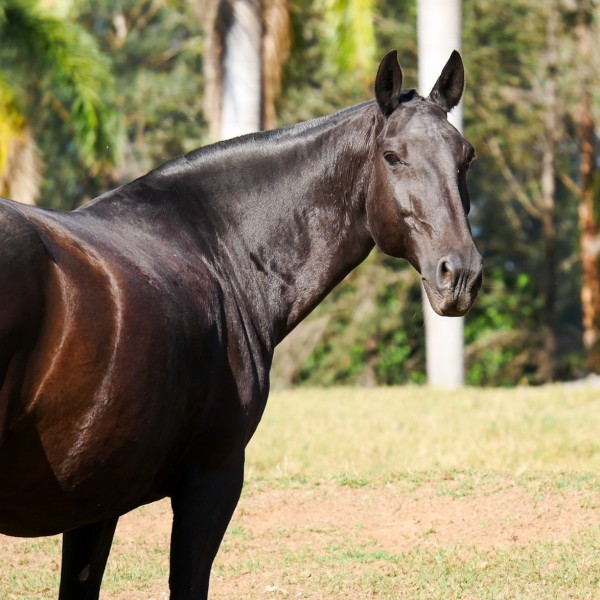 Abdera is a top producing mare with four daughters included in our breeding program: Fenícia Interagro, Gazuza Interagro and Inércia Interagro, revised at the end of  2019 with  79.50 points. She also produced the outstanding Lusitano Interagro the highest price colt sold at the 15th Interagro Yearlings Auction in 2015; Esparteiro Interagro, cover of  May/2020 edition of “Revista Horse”, the largest magazine in Brazil and Matutino Interagro, super talented bay who scored 70%+ at his first show, both Esparteiro and Matutino were sold to the US.

The sire, Nicola (MAC), a striking buckskin deceased in 2019 at 25 years old is famous for its offspring easily distinguished by their straight-forward, docile temperament and incomparable rideability. Several have won important prizes in North American and Brazilian National Shows. Nicola MAC’s sire, Hábil (MV), is a Veiga stallion from the Firme/Nilo/Novilheiro lineage; he has produced some exceptional sons at the Coimbra’s, including Perdigueiro (MAC), now serving at Interagro.  Nicola’s mother, Heroína (MAC), is a daughter of Distinto (MAC), a grand champion mare in Lisbon.  Both Distinto (MAC) and Hábil (MV) were exported to Brazil. Nicola MAC ‘stamps his signature’ on all of his male and female offspring, consistently siring robust, morphologically correct, beautiful, and forward-thinking horses.

Be the first to review “Abdera Interagro” Cancel reply