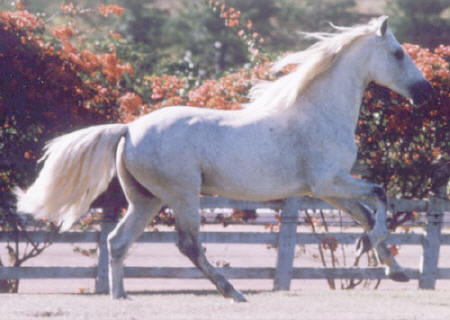 Apolo was one of the most famous stallions in Brazil and has been awarded innumerable times in horse shows, most remarkably as Great Champion Brazilian Horse and Champion Champion Sire-Progeny. Son of Broquel (CN) and Mimosa (OS), Apolo was the first Great Champion bred by Interagro. The father, Broquel, was one of the first Lusitano stallions to come to Brazil since the Portuguese Crown returned to Portugal in the 19th century. Before being imported by Toni Pereira, Broquel CN served as a stallion at the Coudelaria Nacional, at the Andrades and in many other Portuguese breeders, leaving a large and important offspring in Europe.

The mother, Mimosa (OS) is one of the founding mares of Interagro and head of an important progeny; besides Apolo, Mimosa (OS) produced, amongst others, Biluca (Twice Champion of the Country), Dama (Mother of the Great International Champion Lindeira), Ela, Forex and Gabriel, all bred by Interagro.

Apolo had the size, the beauty and the conformation of an “Old Baroque Lusitano”: long manes, elevated movements, good temperament and a lot of attitude. For those reasons, he’s been the Brazilian stallion chosen by Arsênio Raposo Cordeiro to illustrate a page of his book “A Son of the Wind”. He’s father and grandfather to a great number of foals who have become champions. He formed, together with the stallion Níquel (BF), the initial basis of Interagro’s breeding. Several of his offspring and descendants have won titles and prizes in all sorts of competitions, like among others, Lampos, Nestor and Neptuno; several daughters like Medusa and Kiwi (Great Brazilian Champion) have won Gold Medals in Brazilian Shows, also all of them bred by Interagro.

Be the first to review “Apolo do Mirante” Cancel reply