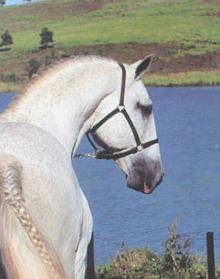 EMIR II (MV) is a 100% Coudelaria Veiga bloodline stallion. Son of UNIVERSO (MV) and LARANJA II (MV), he has two full brothers, Guadiana (MV) and Cravo (MV) who are on duty at some of the main Portuguese lineages like Veiga itself, Coimbra and David Ribeiro Telles. In his pedigree he shows the purest Veiga bloodline, just like Bailador, Toleirona, Beleza, Boca-Negra, Que-Bá, Sultão, and Laranja, and has been chosen to join Interagro’s herd precisely for those reasons. He was acquired in 1988 and bred to mares mainly of Veiga, Coimbra, Nuncio and Andrade bloodlines, in order to produce purebred Veigas and Veiga-Andrades. In a smaller scale, he was also used on CN mares. Many of his sons have been awarded in Brazilian shows, some with Gold Medals. Among others we can name Maraviha, Menelau, Morabito, Mandala (Gold Medal 1997), Nostradamus (exported to the U.S.A.) and Amsterdã RT, Grand International Champion 1997. Emir II MV was sold in 2003 to a Brazilian breeder.