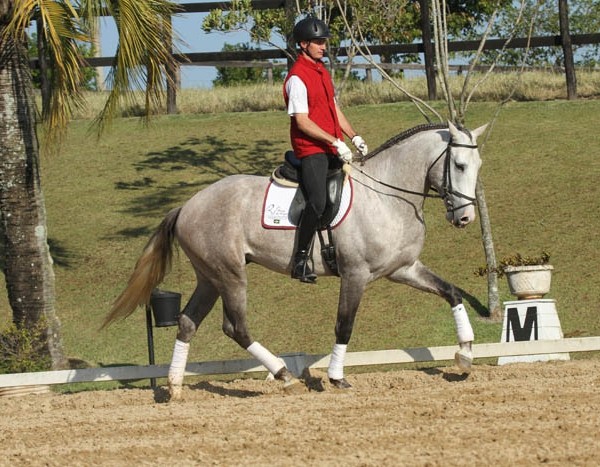 Exclusive do Vouga is a very young horse who will just turn 4 in September. He already stands 16.1 ¾ hands, is starting his work under saddle very easily and showing quality gaits in movements and nobility. Even at his young age, he has a solid and powerful body which complements his good character. At this early stage it easy to predict that Exclusive could have a successful future in Dressage, with a professional or amateur rider. He is so solid and fun, however, that he would be an equally perfect mount for an owner that prefers pleasure riding.

Exclusive comes from a lineage that won many categories in the last exhibitions in Brazil, as well as in Portugal. He is sired by Violino SS, the most winning son of Ofensor. Violino SS won 3 championships in a row in Portugal, and currently is confirming himself as a breeding stallion in Brazil with a high demand from the local breeders beacuse he is earning a reputation for producing many champions. His winning offspring have won many Gold Medals including Excelente do Vouga (Great Juvenile Champion, 2011 – males) and Forever do Vouga (Great Juvenile Champion 2012), two of the highest titles from an Exhibition. In 2011, showing one 3- year-old colt and two 2-year-old fillies, Violino SS won the progeny class at the XXX International Exhibition for the breed. The mother of Exclusive do Vouga is Oliveira, an imported mare, grand-daughter of Dragão II.

Be the first to review “11 – Exclusive do Vouga” Cancel reply