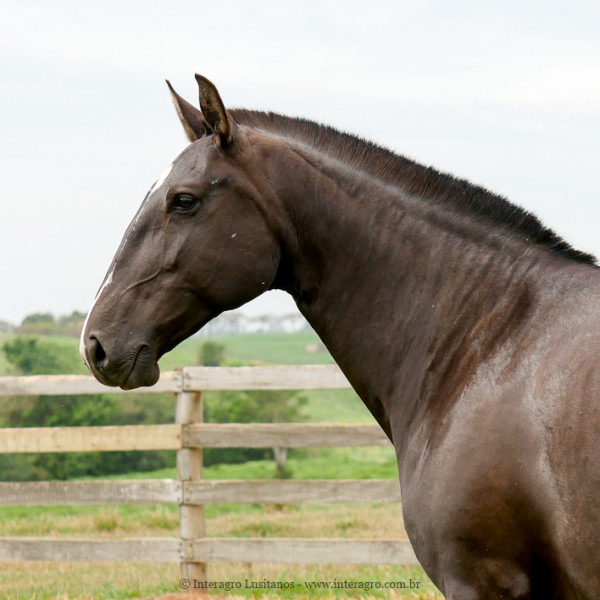 Black mare out of Abdera Interagro and by Zíngaro Interagro, a cross repeated many times with great success producing exceptional horses, including Gazuza, Fenícia Interagro, Inércia Interagro and Lusitano Interagro (colt with the highest bid of the 15th National Yearling Auction in 2015). Abdera’s dam is the gray Ociosa Interagro, a gold medal winning mare revised with 77 points. And her sire, Nicola (MAC), is a striking buckskin stallion who passed away in 2019 at 25 years old. Nicola was famous for his offspring, which were easily distinguished by their straight-forward, sweet temperaments and incomparable rideability. Several of his offspring have won important prizes in North American and Brazilian National Shows.
Nicola MAC’s sire, Hábil (MV), is a Veiga stallion from the Firme (SA)/Nilo (MV)/Novilheiro (MV) lineage; he has produced some exceptional sons at the Coimbra’s, including Perdigueiro (MAC), now standing at Interagro. Nicola’s mother, Heroína (MAC), is a daughter of Distinto (MAC), a grand champion mare in Lisbon. Both Distinto (MAC) and Hábil (MV) were exported to Brazil. Nicola (MAC) stamps all of his male and female offspring consistently, producing healthy, conformationally correct, beautiful, and forward-thinking horses.