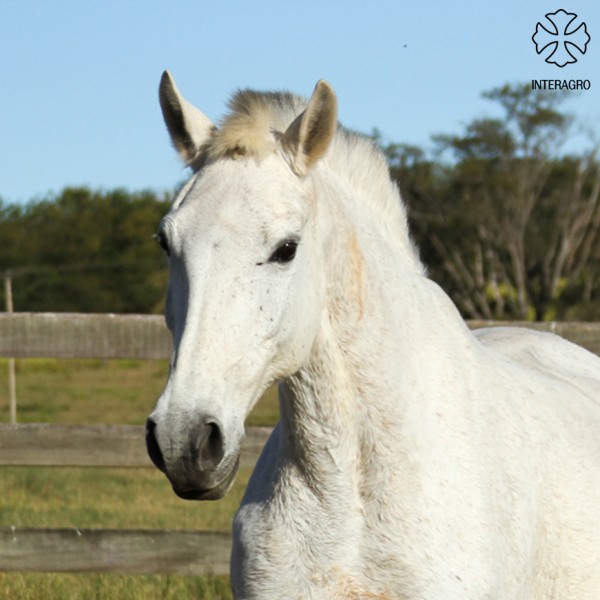 Olímpia Interagro is one of the most prominent mares in Interagro´s breeding program; as Reserve Grand Champion and 2-Year-Old Champion at the 1997 Lusitano International Show, Olímpia went on to produce Bruxo Interagro, who stood at stud at Interagro before being sold, and the decorated Escoteiro Interagro.  Escoteiro, who excelled in conformation classes and dressage, was originally sold at the 2009 Interagro Yearlings Auction and exported by his new owners to the US in 2014.

In the pedigree of Olímpia Interagro, the most important lineages of the breed and the great names that make up the Interagro Lineage are very well represented: Xique-Xique (CI), Yacht (SA) and the Laranja I (MV), Caminheira (MV), Olivença (RA) and Utica (RA).

Her sire, Xique-Xique (CI), born in 1980, at the remarkable Quina Stud Farm, extinct after the 1974 Revolution, was selected by Dr. Guilherme Borba as the stallion to be used in the Quina mares that were under the care of Mr. Alfredo Conde. The political and economic situation in Portugal after the Revolution was not favorable to horse breeding. The difficulties suffered by several Portuguese breeders forced the sale of many extraordinary animals and Xique-Xique was no exception; passed from hand to hand until reaching the Barata Freixo (BF) family, who transferred him to Interagro in 1988, where he was for eight years – from 1989 to 1996 – the head stallion of the house. He produced a hundred extraordinary children who very early showed their potential in dressage and other competitions. Xique-Xique blood flows in virtually all Interagro horses. The most important evidence of the importance of the Xique-Xique is given by the number of his sons who became very successful official Interagro stallions: Noblíssimo, Quínio, Quinárius, Olorin Interagro and Maverick Interagro; 26 of its daughters were incorporated into the group of official Interagro mares, thus, the participation of Xique-Xique in the formation of the Interagro horse was enormous.