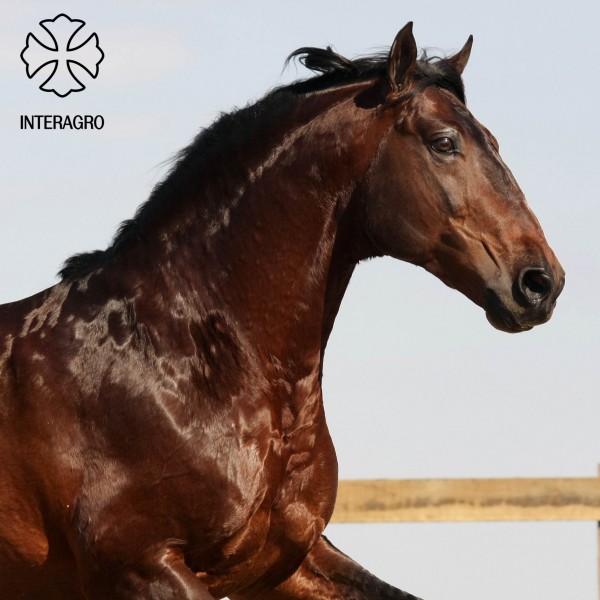 Combining the legendary athleticism and coveted pedigree of his sire Legendário do Mirante and the conformation of Cigana III (MLC), one of Interagro’s foundation broodmares, Profano Interagro has passed his exceptional genetics, talent, and beauty to over a hundred individuals since 1999. The first of Legendário do Mirante´s son to enter service, this horse also inaugurated the second generation of Interagro stallions to enter active service.  His accomplishments include Gold Medals at the Brazilian International Lusitano Shows in 1998 and 2000, and Profano’s promulgation of his sire and dam lines has been very influential in the development of the Interagro lineage.  In addition to his father’s famous heritage, Profano’s dam is one of the most important conformational foundation mares for Interagro, and besides Profano she has begotten a series of Gold Medal Champions and sires of greatly prized offspring: Noblíssimo by Xique-Xique CI; Obtuso by Yacht (SA), an international dressage champion now in the U.S; and Rocinante Interagro by Distinto (MAC). Very much like Xique-Xique (CI), Cigana III (MLC) has definitively imprinted the Interagro lineage and will continue to do so through her sons and their offspring.

Profano’s successful progeny include winners of many prizes and awards in Brazil and abroad in a variety of disciplines including conformation classes, working equitation, dressage, and paradressage.

Xaveco Interagro, who was sold at the 2007 national auction, had a brilliant career in Brazil. His accolades include many national and international rankings and most recently clinching World Cup honors at the 1st Working Equitation World Cup with Claire Moucadel of France and was sold to the US,  where he won International Division of Working Equitation at Haras Cup 2016 ridden again by Claire Moucadel

Zizifo Interagro, after competing in Brazil, started his career in Para Dressage, competing at the 2014 Alltech FEI World Equestrian Games in Normandy, France with his rider Patricio Gugliamelli of Argentina. Zizifo was also the Champion of the 2015 Iberian Dressage Masters ridden by Alessandro Benedetti. In September he came to his home country to compete at Rio 2016 Paralympics with Argentinian Patricio Guglialmelli at Grade III.