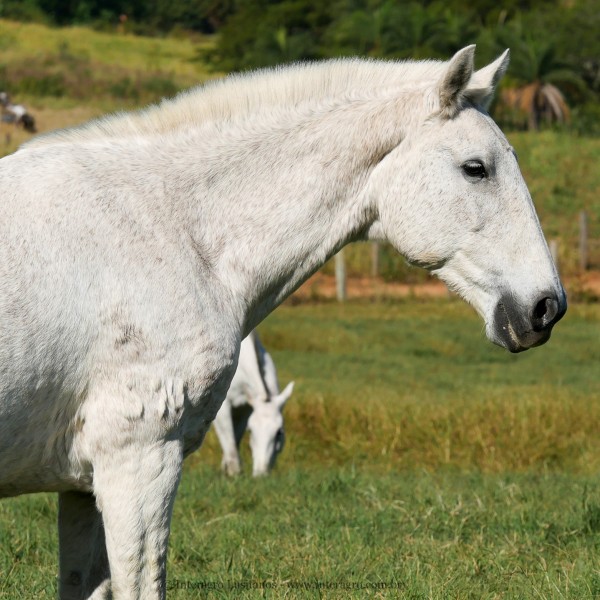 Tiffany is an excellent mare, with a pedigree that combines some of the most functional lines of PSL transmitted by Novilheiro (MV) – father of Legendário do Mirante – and by Yacht (SA), father of Haste (SA); the latter being the dam of the well-known stallion Inca (RC) [Novilheiro (MV) x Haste (SA)], with a pedigree very similar to that of Tiffany. With Bungo Interagro, she produced the full brothers Hamilcar Interagro, Nevasca Interagro, Perdicas Interagro and Radiosa Interagro. Two of her sons were exported, Aclamado Interagro to the United States and the Hamilcar Interagro, sold in Brazil where it won awards in Conformation and Classical Dressage before going to Uruguay where it has been competing in the sport with great results.

Her sire, Legendário do Mirante, was very imposing and of great beauty, considered one of the best sons of the fabulous Novilheiro (MV), one of the most famous Lusitano horses of all time. In the course given by representatives of the Portuguese Stud Book to Brazilian technicians in 1997, the late Legendário do Mirante was used to demonstrate the ideal type of morphology and functionality desired of the modern Lusitano Horse. Interagro has always admired the quality and genetic potential contained in the Firme/Nilo/Novilheiro strain. Interest in this fantastic strain led Interagro to acquire from Arqto. Arsênio Raposo Cordeiro a group of mares covered by this extraordinary stallion. Among them was Ulisséia (RC) – Female Champion, Gold Medal in Lisbon (1984) and Champion Mare Imported in Brazil (1989) – who arrived here and gave birth to Legendário. Arsênio Cordeiro also provided Interagro with another group of mares, descendants of Guerrita (MV), the mother of Novilheiro (MV). Carefully using this rare and precious genetic material, it was possible for Interagro to establish this lineage, which now appears very frequently in our pedigrees, introduced by Legendário himself and his children. Legendário had several award-winning sons, champions of morphology and functional tests, as well as several sons and daughters exported to other countries in America, most of them to the United States.