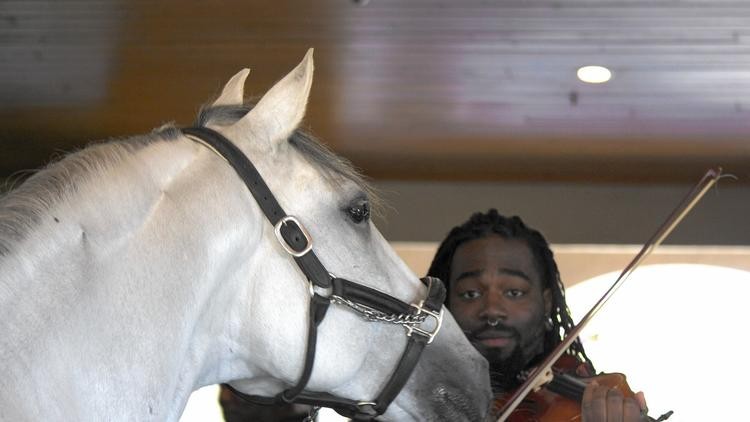 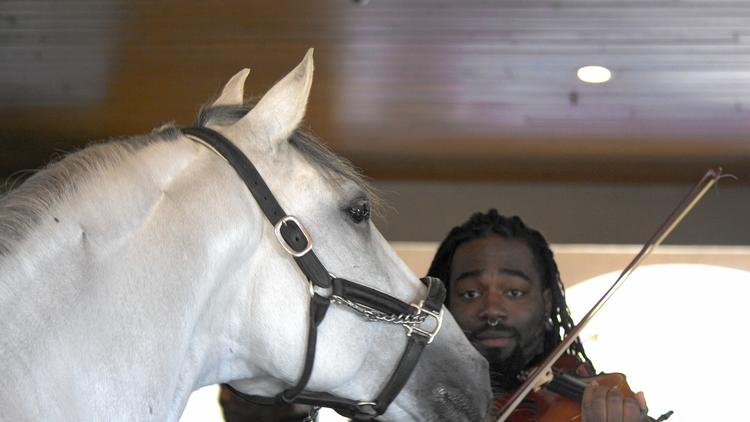 Before the idea for a music video took root, Roffman was thinking about the music she wanted use for her musical freestyle for dressage. While most riders use recorded music, Roffman was looking for something special.

“I went out looking for someone willing to compose music,” she said. “Like a movie score plays to the action in the scene, I want to have music that follows the pattern of the horse.”

While searching the Internet, Roffman came across DSharp, a violinist, artist, DJ and producer, and his music and was blown away, she said. She got in touch with DSharp, whose real name is Derryck Gleaton, and together they came up with a special routine for Roffman and her horse.

“I thought it would be cool for us to put something together with the horse,” DSharp said. “I never heard of that before but I said, ‘Let’s try it.’ I’m always down for doing different projects and things outside of the box.”

However, Roffman never got to use DSharp’s music because she sold her horse.

“Now I’m left with a beautiful piece of music and connection to an artist and no horse to ride to,” she said. “That’s the business.”

It wasn’t until DSharp came down to Miami for Ultra Music Festival that Roffman and DSharp finally met and the plan for the music video was born. For the video, Roffman rode several horses, one being Vade-Mecum Interagro, a Grand Prix gelding of Interagro Lusitanos Farms in Brazil.

“I am a professional; I ride a lot of different horses every day,” Roffman said. “Vade-Mecum was beautiful and talented but we used other horses as well.”

“I’ve done a huge amount of entertainment work with horses so I thought it was a natural graduation,” Peter van Borst, U.S. representative for Vade-Mecum Interagro, said. “He’s a very beautiful horse. It’s a good thing for the horse and for the person in the video; it completes the whole circle in my opinion.”

Roffman and her team are used to working around horses but for DSharp it was a new experience.

“It was a little intimidating at first. I had never been around live horses much in my life and I didn’t know how to handle them,” he said. “But everyone was so knowledgeable and knew these horses, and they made it a comfortable environment.”

Once he felt more comfortable, DSharp, along with Roffman and the film crew from Afflux Studios, spent all day shooting the video with a variety of scenes.

“My talent is not dancing or anything popular or main steam but to be a part of this was great,” Roffman said.” It was an awesome experience for me and an adventure I got to have.”

“I hope they enjoy the music and the sensory and that it fuses together really well,” DSharp said.

To view the music video, set to be released within the next two weeks, visit DSharp’s YouTube channel, youtube.com/iamdsharp, or his FaceBook page at facebook.com/whoisdsharp.