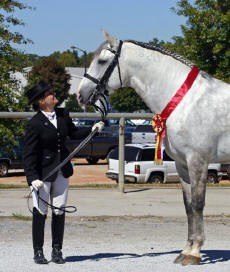 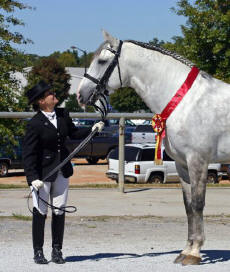 Bender Has Wins Of A Different Breed At Heidelberg Cup

Heather Bender aims to prove that Lusitanos can match wits with the best of the warmbloods in the show ring, and she made her point at this year’s Heidelberg Cup USEF qualifier.

Bender and the Lusitano stallion Sargon Interagro earned the high-score award, March 23-26 in Clarcona, Fla. Along with that honor, she also racked up an impressive collection of first-placed ribbons, thanks to Sargon and two other Lusitanos she showed.

Both 5-year-olds, Umbar Interagro and Ultimo Interagro shone at training level. Umbar earned the high-score for training level with a 71.53 percent in training level, test 4. And Ultimo finished second in that same class with a score of 62.30 percent, ridden by Franziska Pfeiffer.

All three Lusitanos were bred by and imported from the Brazilian breeder Interagro Lusitanos.

“Interagro has worked to breed horses that will be successful in FEI competition,” Bender said. “Lusitanos have an amazing ability to collect but often have difficulty with the extensions. Interagro has bred Lusitanos with more extension. And I can say that I’m getting great scores on my extensions, usually 8s.”

The 7-year-old Sargon, owned by Minnesota resident Louise Pinto, has been with Bender since he was 3 and is the horse that really kicked off Bender’s relationship with Lusitanos.

“I fell in love with him and that got me involved,” she said. “He’s pretty much won at every show I’ve taken him to.”

But he’s not the average-sized Lusitano; Sargon stands 17 hands. “And he’s got big bone,” Bender said. “In fact, all three of them are a good size.”

Umbar is more than 16 hands, and Ultimo is right at 16 hands. Both are owned by Tom Mikes, and Bender expects both to continue growing.

Showing What They Can Do
Bender wants to bring Lusitanos into the country and show people what they can do. “I think that during this winter circuit I’ve shown that the Lusitano can compete against the warmbloods,” she said.

The judges seem to agree. “I can honestly say that I’m not finding any prejudice at all among the judges,” Bender said. “And it’s not just that one Lusitano is doing well, it’s the whole crew I have. If the horses have nice, correct gaits and get the correct training and the right foundation, they’ll do well. All three are still green, and I view every show as merely a learning experience. But I did expect them to come and to do their job and do it well. Sargon, in particular, has been really consistent.”

All three handled the show environment well. “They are wonderfully bold and brave because of their bullfighting blood,” she said. “I can work on things at home, take them to the show and continue the same work in the warm-up ring and then take that into the show ring. The change of location doesn’t bother them. They stay focused on the work.”

As proud as she was of the Lusitanos, Bender was just as pleased with Winwood’s win in the Intermediaire I with a score of 70.41 percent, which earned her the FEI high-score award. “I’m getting him ready for the Grand Prix, and I did the I-1 this weekend because I just wanted to keep him showing,” she said.

Juggling And Winning
In the FEI levels, Anne Gribbons showed just how well she balances her busy life as rider, trainer and judge when she took both first and third places in the Grand Prix GAIG/USDF qualifying class with Aureate and Leoliet, respectively.

It was quite an impressive showing for someone who claims to have no real competitive agenda for the horses. “I only come to keep them in the show ring,” Gribbons said.

While Aureate is a seasoned Grand Prix horse, Leoliet, a 12-year-old, Dutch Warmblood stallion by Zioliet, is still struggling a bit with collected work.

“He has too much elasticity,” Gribbons said. “His canter stride is so big that he really has to struggle to get in the changes. But he knocked himself out for me in the Grand Prix, and the judges agreed.”

Alazan’s victory in the Prix St. Georges, in which he earned a score of 67 percent and beat out 17 other competitors, was a bit of a surprise to Gribbons, not because the Prix St. Georges is a stretch for the gelding’s ability but because she intended it merely as a warm-up class for the Intermediaire I.

“He needs a warm-up class because he loves to show too much. He usually explodes in the first class. It’s like he has stage fright,” Gribbons said.

The 10-year-old Alazan, by the Danish stallion Midwest-Ibi-Light, was so excited about going to the Heidelberg Cup that Gribbons said, “When we packed up the van he actually ran down my husband to get on it.”

Gribbons rides three to six horses a day. “For a while I was also doing eight lessons a day,” she said.

She said she enjoys the riding and teaching far too much to ever give it up. And while she also enjoys being a top dressage judge, she cut back on her judging responsibilities this winter to focus more on her riding. With the end of the Florida season, Gribbons’ judging responsibilities will take up more time, so she doesn’t plan to show her three FEI mounts much this summer.

In the 5-Year-Old Test, Gwen Poulin and Marjan De Destinado earned an 81.60 percent to finish first, and right behind them was Kristy Truebenbach-Lund on Reel Adventure with a score of 80 percent.

“The judges gave him a good score in the trot and walk and a hair less in the canter,” Francis said. “The footing was a bit deep and soggy in the corners, and that’s where he had trouble in the canter.”

She said his flying changes were “a bit sticky” and he wasn’t quite straight in some of his downward transitions.

Francis is certain that Wig Wam, an Oldenberg gelding by Wolkantanz II and owned by Patricia Stempel of Michigan, is destined for Grand Prix, but she’s putting no pressure on him to get there.

“He might make it to the World Championships for Young Horses this summer, but that’s not my focus. I’m more concerned about developing him gymnastically with the ultimate goal of preparing him for Grand Prix,” she said.