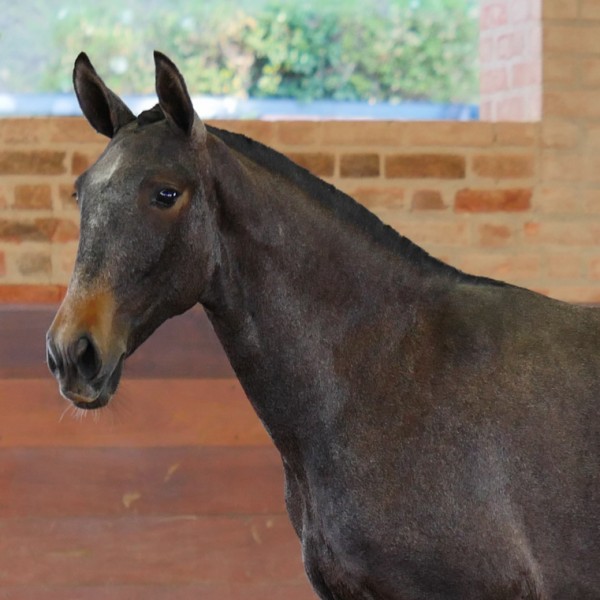 Ronda is a calm and strong filly with a beautiful head. She has a good walk, size and structure, just like her mother, Hagar Interagro, a 16.1 hh chestnut, early deceased.
Hagar was out of the beloved black mare Odalisca (RC), one of the group of descendants of Guerrita (MV) ceded by Arsenio Raposo Cordeiro to Interagro, were imported not only because of their individual merits but also to reinforce the introduction of the bloodlines selected to form the Interagro lineage. In this respect what is very special with Odalisca (RC) and this group of (RC) mares is her maternal great-grand mother, Guerrita (MV), the mother of the very famous Novilheiro (MV). Using the offspring of both, Novilheiro (MV) and his mother Guerrita (MV), and the resulting consanguinity, we were able to introduce some of the most desired functional characteristics in the Interagro Lineage. Sired by Nirvana Interagro, a highly decorated FEI dressage competitor and stud known for his athletic and intelligent offspring, that is of the Andrade and Coudelaria National bloodlines.

Her sire is Hanibal Interagro, a striking stallion with presence, height, and spectacular movement. This eye-catching grey stallion’s beauty and demeanor captures the attention and admiration of any dressage enthusiast, particularly his lofty movements: he has a quick and powerful hind leg and exceptional freedom through the shoulder coupled with excellent suspension. He has proven to stamp his progeny with both his looks and talent. Hanibal is the last son of Legendário do Mirante (by Novilheiro MV). His dam, Berta Interagro, is out of awarded Ninfeta Interagro by Xique-Xique (CI) with the International Great Champion Kiwi do Mirante, a daughter of Apolo do Mirante by (Broquel CN), the first Great Champion bred by Interagro. Berta´s parents are Quixote Interagro (by Danúbio III MV) and Dançarina II (RC) by Venturoso III (MV).
This is a pedigree with the most influential Lusitanos responsible for the Interagro lineage.